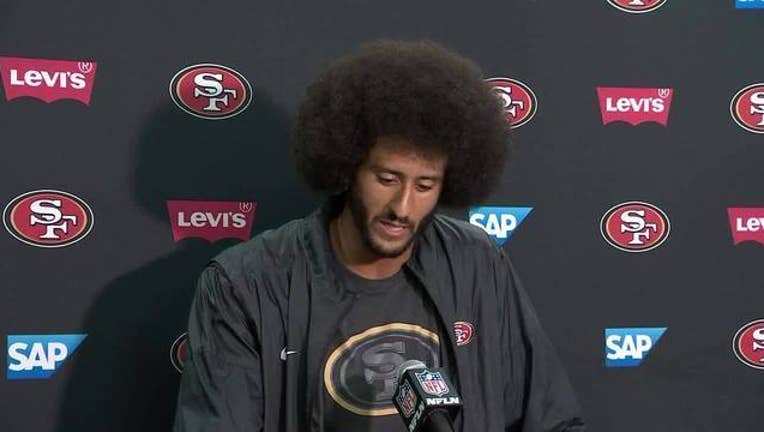 Colin Kaepernick and the San Francisco 49ers tried everything. Deep throws and out routes. Crossing patterns and shovel passes. Nothing worked.

Call it a snow day for San Francisco's aerial attack.

Kaepernick completed just one pass for 4 yards before he was replaced by Blaine Gabbert in the fourth quarter, and the lowly 49ers dropped their 11th straight game with a 26-6 loss to the Chicago Bears at a wintry Soldier Field on Sunday.

San Francisco (1-11) finished with a record-low 6 yards passing while strengthening its position for at least the No. 2 overall pick in next year's NFL draft, handing a third win to one of their main competitors for those prized selections at the top of each round.

The winless Cleveland Browns, off this weekend, have the pole position for the top spot heading into the final quarter of the season.

The April draft is about all 49ers fans have to look forward to these days.

Whether that's with Kaepernick or Gabbert at quarterback remains to be seen. Coach Chip Kelly was non-committal when asked about his starter for next weekend's visit by the New York Jets.

"That's not my decision," Kaepernick said. "My feelings on it really don't matter at this point. I'm just going to do everything I can to make sure I'm prepared."

Kaepernick attempted five passes and was sacked five times. Gabbert, who led San Francisco to a 26-20 overtime win in Chicago a year ago, was 4 for 10 for 35 yards.

The 49ers' previous franchise low for net yards passing was 10 against Detroit on Oct. 6, 1963, and it looked as if that number was safe before Gabbert was sacked by Leonard Floyd in the end zone with 1:55 left.

"We just had breakdowns here and there all day long and it definitely showed," Gabbert said.

While the 49ers are barreling toward perhaps the worst season in franchise history, Kaepernick had been a bright spot of late. He had passed for 1,110 yards and eight touchdowns in four starts since San Francisco's bye week, nearly rallying the 49ers to a victory in Miami last weekend.

But San Francisco emphasized the run right from the start against the Bears and Kaepernick never looked comfortable while playing in a steady snowfall on a typical winter day in Chicago.

"I think the weather was something that definitely played a factor," Kaepernick said. "We have to be able to do a better job managing that, handling it, and being able to throw the ball still."

Kaepernick's 4-yard pass to tight end Vance McDonald midway through the second quarter was the first completion of the day for either team. Phil Dawson then kicked the first of his two first-half field goals, helping San Francisco to a 6-0 lead.

Chicago (3-9) got the ball back late in the half, and that's when Matt Barkley started to find his footing while Kaepernick continued to falter. Barkley then directed the Bears to Jordan Howard rushing touchdowns on three straight possessions, putting San Francisco away.

"We didn't handle the weather very well from a passing game standpoint," said Kelly, who coached with a heavy heart after the recent death of his father, Paul. "It was the same for both teams, it's not an excuse, they played in the same conditions."

Connor Barth's 45-yard field goal made it 24-6 with 12:55 left, prompting Kelly to turn to Gabbert. Kaepernick pulled on a red coat with the hood over his head and watched from the sideline, delighting the crowd of 46,622 that included a couple of strident hecklers particularly interested in the QB continuing to kneel during the national anthem to protest the treatment of minorities.

Asked about kneeling during the anthem at Soldier Field, Kaepernick paid tribute to former Black Panther leader Fred Hampton, who was killed in 1969 when Chicago police raided his apartment in search of guns.

"I do think there is significance being here today, seeing that it's the anniversary of the assassination of chairman Fred Hampton," Kaepernick said.

"Being in Chicago, being able to acknowledge a black figure, a black leader like him, is very important and his role in being a leader in this community and bringing this community together is something that needs to be acknowledged."

Jay Cohen can be reached at http://www.twitter.com/jcohenap