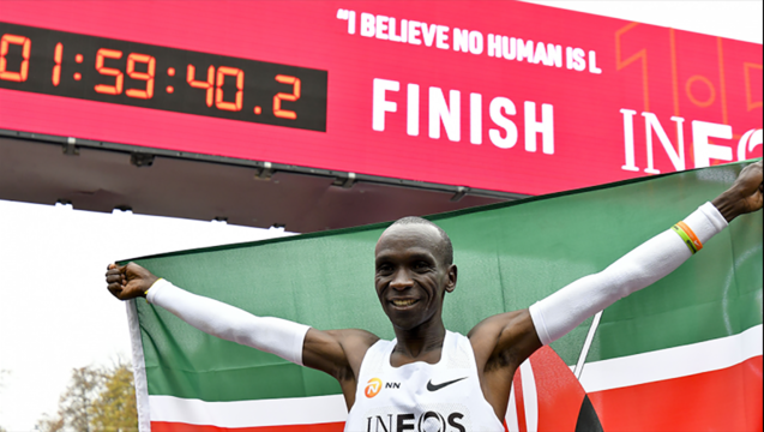 The Olympic champion and world record holder from Kenya clocked 1 hour, 59 minutes and 40.2 seconds at the INEOS 1:59 Challenge in Vienna.

"Today we went to the Moon and came back to earth!" Kipchoge said on Twitter. "I am at a loss for words for all the support I have received from all over the world."

He pounded his chest in triumph at the end of the race set up for the attempt.

"That was the best moment of my life," he told reporters before adding that he trained four-and-a-half months for his extraordinary race against the clock. "The pressure was very big on my shoulders. I got a phone call from the President of Kenya. I am the happiest man today."

Kipchoge pointed out his mission went beyond athletics.

"We can make this world a beautiful world and a peaceful world," he said. "The positivity of sport. I want to make it a clean sport and an interesting sport."

Kipchoge's barrier-breaking run won't count as an official world record because it was not run under open marathon conditions, according to reports.

Kipchoge was helped along by three dozen pacemakers in alternating groups.

The 26.22-mile race also featured a pace car with a laser beam, projecting the ideal position on the road. Cyclists supplied drinks so runners wouldn't have to slow down.

Running at an average pace of 4:33.5 minutes per mile, Kipchoge was 11 seconds ahead of schedule halfway through his run. He then maintained his tempo until the pacemakers left him for the final 500 meters, where he sped up.

"I was really calm, I was just trying to maintain the pace," said Kipchoge, adding he was never in doubt about breaking the barrier. "For me it was not 50-50, it was 90 percent."

Hundreds of joyous Kenyans brought traffic to a standstill in the middle of the capital, Nairobi, as they gathered to watch the end of the run on a large screen.

In May Kipchoge came close to running a marathon in under 2-hours in the U.K.