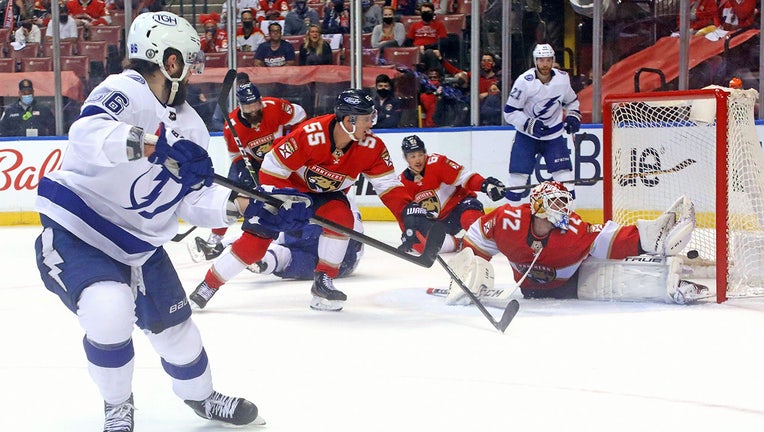 Nikita Kucherov scores on the powerplay at 14:51 of the second period against Sergei Bobrovsky of the Florida Panthers in Game One of the First Round of the 2021 Stanley Cup Playoffs. (Photo by Bruce Bennett/Getty Images)

TAMPA, Fla. - For 60 minutes, the Lightning and Panthers traded shots -- a first-round match that played out like a heavyweight championship. In the end, it was the Lightning's Stanley Cup pedigree shining through.

"I just had the best seat in the house for it," said Lightning head coach Jon Cooper. "It was quite a hockey game.  Two exceptional teams going at it. That's why it's the greatest sport in the world. We just witnessed why, that display and those two teams."

"So many things are going to happen within the course of a series, a period, a shift, that can change momentum," Steven Stamkos said. "The game is never over. We've learned so many times in the playoffs and the runs we've been on, whether it happened against us, or like we saw tonight, where we were able to pull one out. So many things can happen, so you just stick with it. There's no point in getting frustrated or down on each other."

RELATED: Point scores 2 in 3rd to lift Lightning over Panthers

An inexperienced team could have withered, especially after missing so many scoring chances.  Nikita Kucherov started off a little rusty, failing to convert on a one-on-one breakaway in the first period  Steven Stamkos misfired on an open net in the second period with Panthers goalie Serge Bobrovsky out of position and with a clear view of Erik Cernak was denied by a Panther defenseman.

The Lightning overcame all of them, sparked by Kucherov's two second-period goals in his first game action in eight months following hip surgery.

"He's like a kid waiting for a candy store to open," Cooper said. "And he gets there a half-hour early and has to wait outside. He was just itching to get back into the game."

"I was excited to get back," Kucherov agreed. "I waited for this for a long time.... The new hip, it's a new hip. It's just different. Way better and I feel really good."

This was a game that the Lightning didn't think he'd be back for.

"When we first went through this process way back when, we were like, ‘Kuch isn’t coming back,’" said Cooper. "’We have to at least make it to the second round for him to come back.’ Sure enough, he found his way back in Game 1. It takes a lot of mental fortitude to be able to work yourself back when you’re not allowed to play 56 straight games. Man, he hasn’t played in seven and a half months, that’s tough. To come out and have the game he did tonight? He deserves it because I watched the kid work his butt off to get here."

"His presence, you can tell it gives the whole team a lot of confidence," Victor Hedman added. "It's tough to see how guys are going to react after sitting out that long, but from the start he had jump, he made some great plays, had two goals and three points. That says all about what kind of player Kuch is. He's a clutch player…It's very impressive to see Kuch come out and deliver like that in the first game back. Scary part is he's only going to get better."

And the Lightning know they can be too.