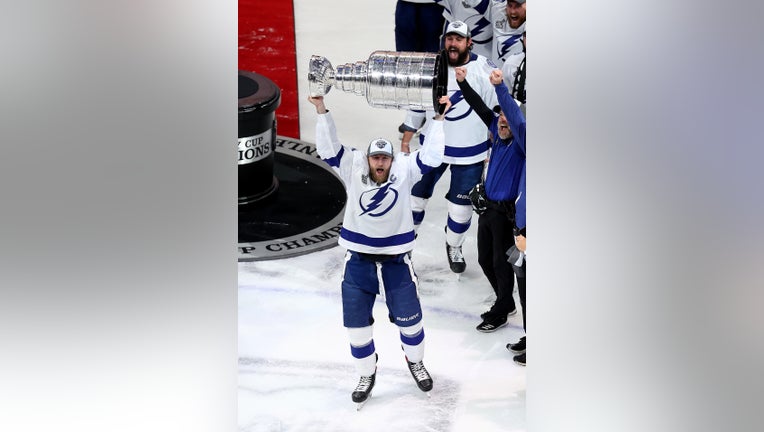 EDMONTON, Alberta - The Tampa Bay Lightning are the champions of bubble hockey. Brayden Point scored his playoff-best 14th goal, and the Lightning beat the Dallas Stars 2-0 to win the Stanley Cup and finish off the NHL playoffs staged in quarantine during the pandemic.

Brayden Point scored his playoff-best 14th goal and the Lightning beat the Dallas Stars 2-0 on Monday night to win the Stanley Cup and finish off the most unusual NHL postseason in history, staged nearly entirely in quarantine because of the pandemic. The clock hitting zeros in an empty arena nonetheless set off a joyful celebration for a team that endured years of playoff heartbreak and two months in isolation.

“It takes a lot to be in a bubble for 80 days or whatever long it was,” said defenseman Victor Hedman, who won the Conn Smythe Trophy as playoff MVP. "But it’s all worth it now, we’re coming home with the Cup.” 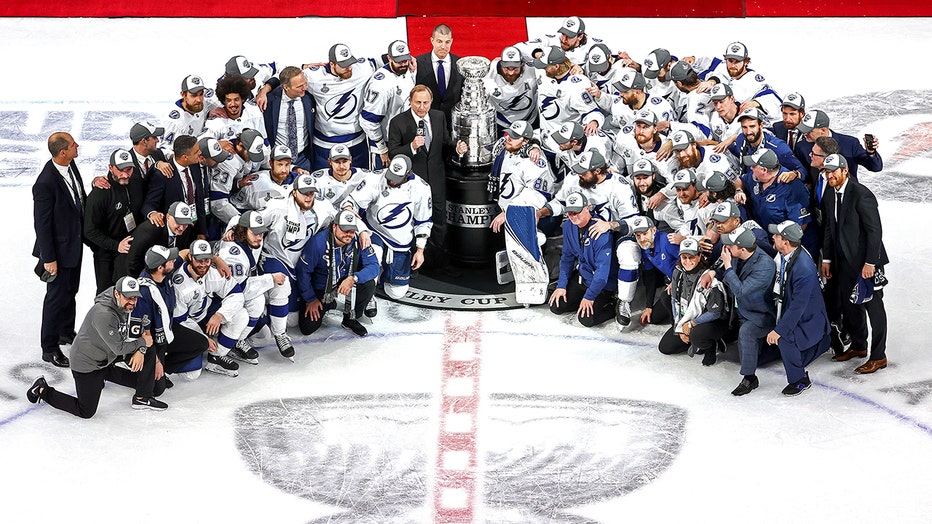 Goals from Point and Blake Coleman and a 22-save shutout by Andrei Vasilevskiy in Game 6 were enough to power the Lightning to their second championship after winning it in 2004. That also came with the league on the verge of a labor stoppage, a lockout that wiped out an entire season, and similar uncertainty hangs in the air now because of the coronavirus.

MORE: Flashback to 2004, the last time the Bolts won the Stanley Cup

Questions about the future were put off for a celebration, by the Lightning and the NHL. Getting this done was a triumph of sorts, financial woes notwithstanding. The NHL is the first of the four major North American professional sports leagues to crown a champion since the start of the pandemic. 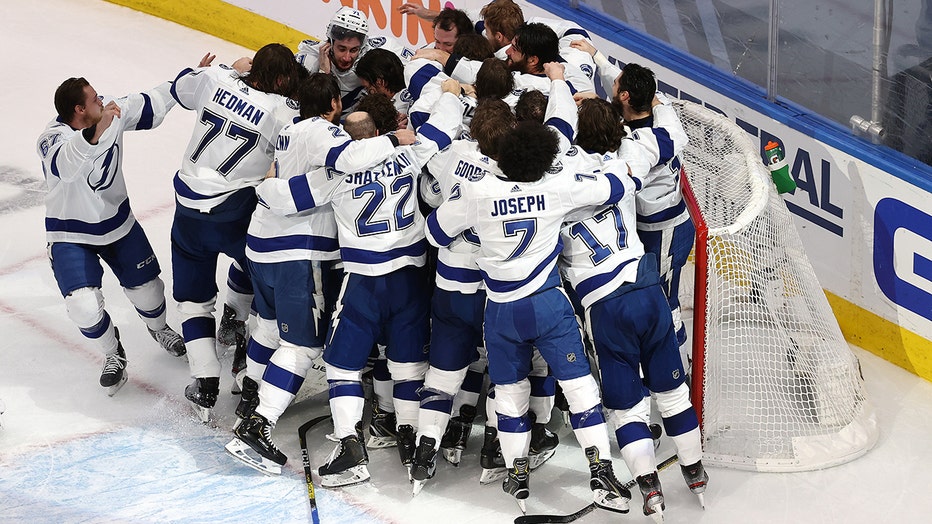 Tampa Bay's core group closed out the final with an almost poetic display of what got the Lightning to this point over the past several years and months. Their new star in Point scored a power-play goal in the first period with assists from longtime standouts Nikita Kucherov and Victor Hedman, key addition Coleman killed a penalty and scored on an odd-man rush in the second, and Vasilevskiy did his job on a relatively slow night in net.

It was more of a coronation than a challenge as the dominant Lightning outshot the Stars 29-22 and looked like the powerhouse they've been for much of the past decade.

“The beauty of our team is everyone was chipping in," Point said. “We got tremendous depth. We got contributions from anyone and everyone at different times, and that’s what makes this win so special." 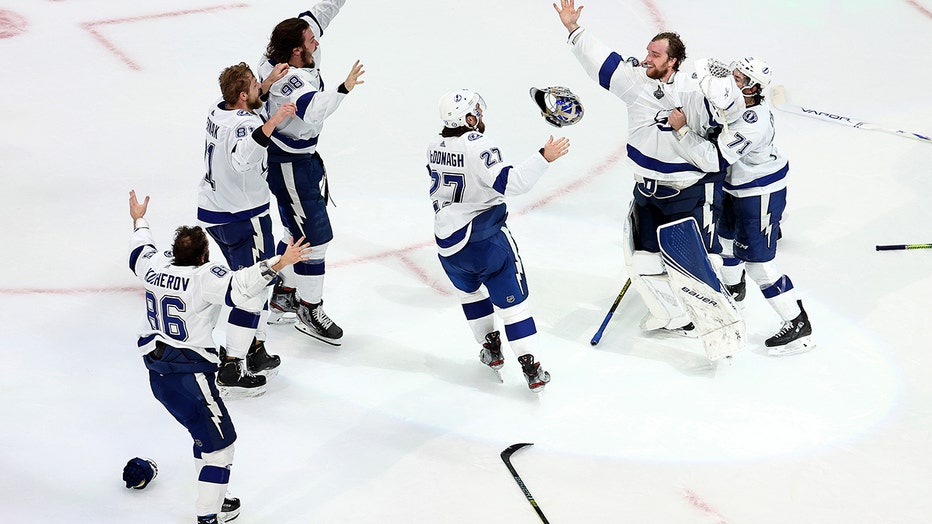 In the final alone, Tampa Bay's power play was clicking and turned the series around. Point's goal made it 7 for 16 over the past five games to decimate the Stars, who were undone by their lack of discipline and couldn't get enough “Dobby” magic from goaltender Anton Khudobin.

The Stars simply ran out of gas after injuries piled up. Rick Bowness, an assistant for Tampa Bay for five years who was part of their 2015 run that fell short in the final, faced his own uncertain future as interim head coach.

The Lightning did to the Stars what Chicago did to them in the ’15 final, when injuries built up. Tampa Bay had Point and No. 2 center Anthony Cirelli playing hurt this time, didn’t have injured captain Steven Stamkos for almost all of the playoffs — and still survived. 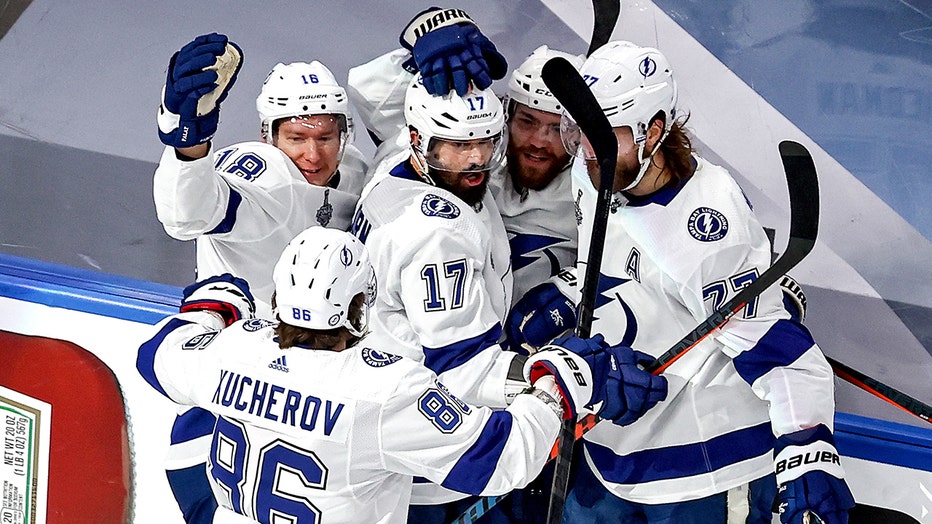 Brayden Point is congratulated by his teammates after scoring a goal against the Dallas Stars during the first period in Game Six of the 2020 NHL Stanley Cup Final in Edmonton, Alberta, Canada. (Bruce Bennett/Getty Images)

The painful playoff losses look like mile markers now — losing four consecutive games to Chicago after going up 2-1, blowing 3-2 series leads in the Eastern Conference final in 2016 and 2018, and last season's jaw-dropping, first-round sweep by Columbus after the Lightning had tied the NHL single-season wins record and won the Presidents’ Trophy.

Coach Jon Cooper thought the attitude needed to change from wanting to beat every opponent 9-0 because that’s not realistic in playoff hockey. His team went 12-3 in one-goal games this postseason. 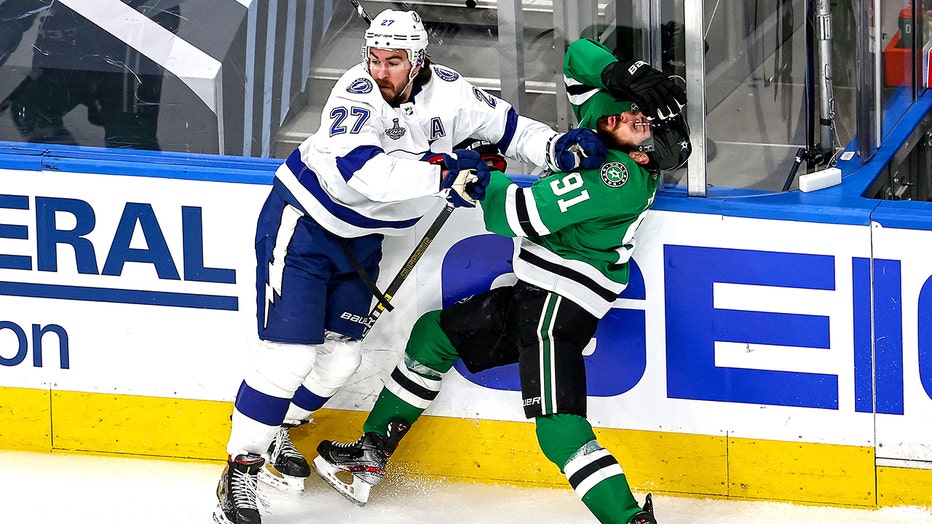 Ryan McDonagh of the Tampa Bay Lightning checks Tyler Seguin of the Dallas Stars during the second period in Game Six of the 2020 NHL Stanley Cup Final at Rogers Place. (Bruce Bennett/Getty Images)

Commissioner Gary Bettman was on hand to present the Lightning with the Stanley Cup exactly 200 days after his dismal if hopeful announcement that the season was being put on pause with 189 games left unplayed.

The league and players’ union worked for nearly four months to iron out where, how and when to play so 2020 wouldn’t join 1919 and 2004 as a year in which the Cup wasn’t awarded. The plan they came up with was unusual. Like the NBA, it called for walling off teams from the public for months on end. Unlike the NBA, it called for doing it in two spots — Toronto and Edmonton, while the U.S. grappled with spiking coronavirus cases in too many places for NHL leadership to feel comfortable. 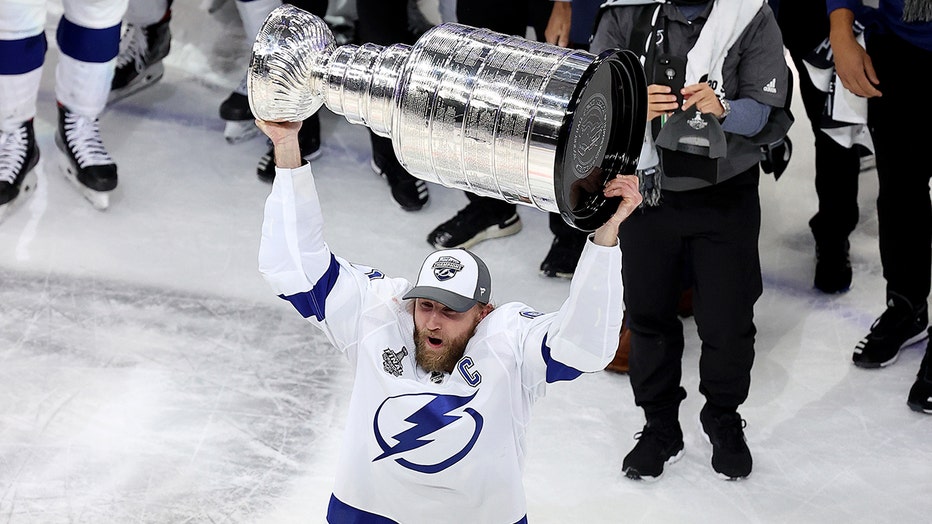 Steven Stamkos #91 of the Tampa Bay Lightning skates with the Stanley Cup following the series-winning victory over the Dallas Stars in Game Six of the 2020 NHL Stanley Cup Final. (Bruce Bennett/Getty Images)

And it worked. After more than 31,000 tests, there were zero positive coronavirus cases reported among players, coaches and staff inside the bubbles and just a handful among hotel, arena or restaurant employees. There was nothing close to a breakout.

Bizarre as it was with no fans and manufactured crowd noise and light shows, the hockey was often top notch. The expanded, 24-team playoffs meant there was hockey nearly every day, sometimes from midday until past midnight, including a five-overtime marathon that was the second longest in modern hockey history. And in this unprecedented postseason, there were even two elimination games on the same day in the same arena.

By the conference finals, Rogers Place, a nearby JW Marriott and the rest of a heavily fenced bubble in downtown Edmonton became the center of hockey for fans thousands of miles away with Dallas and Tampa Bay, two of the southernmost teams in the league, settling the Cup in the NHL’s northernmost arena.

In all, the NHL played 130 games in a bubble, 25 of them going into overtime, before the final horn set off a celebration by Tampa Bay that simply had to do with no fans in the stands, and few loved ones allowed on the ice to share the moment.

NOTES: Tampa Bay is the first team to win the Cup without a captain dressed for the clinching game since the 1977 Montreal Canadiens Yvan Cournoyer missed the playoffs because of back surgery. ... Kucherov's 27 assists are the third most in a single postseason behind only Wayne Gretzky and Mario Lemieux. ... Alexander Volkov made his NHL playoff debut in the clincher for Tampa Bay.

The NHL has targeted a tentative Dec. 1 start date, but even Bettman acknowledged a later December or January start is possible. And even that is no guarantee given the uncertainty.

It's time for Stanley to get that tan after the Tampa Bay Lightning clinched their second Stanley Cup win -- all without an in-person crowd. Fans can celebrate the big-win, but it will have to be done safely, the team announced.