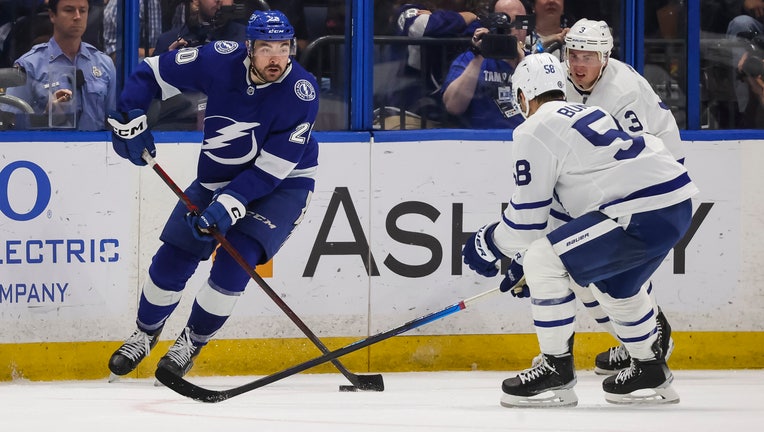 TAMPA, FL - DECEMBER 3: Nicholas Paul #20 of the Tampa Bay Lightning skates against the Toronto Maple Leafs during the second period at Amalie Arena on December 3, 2022 in Tampa, Florida. (Photo by Mark LoMoglio/NHLI via Getty Images)

Alex Killorn scored from the right circle 33 seconds in the extra period. Anthony Cirelli, who made his season debut followng shoulder surgery, passed the puck to Killorn for the winner.

"It’s cool," Marner said. "I grew up in the city. I love being part of this team now days. It’s special to me. It’s special growing up to watch this team play hockey. Now to have my name on something amazing, it’s hard to describe."

Tampa Bay had taken a 3-2 on power-play goals by Nikita Kucherov and Ross Colton in the opening 4:34 of the third. Kucherov’s goal came after Marner was sent off for tripping at 4 seconds.

Andrei Vasilevskiy made 36 saves, and Vladislav Namestnikov also scored for the Lightning.

"It felt great just to be out there with the guys," Cirelli said. "It’s awesome. It’s been awhile."

The teams combined for 15 minor penalties. The Lightning went 2 for 6 on the power play, while Toronto converted one of five chances.

"It was a weird game," Tampa Bay coach Jon Cooper said. "I think both coaches and staffs will look at it, and the only benefit was we got the extra point."

Just 22 seconds after a goal by Tampa Bay’s Brayden Point was overturned for offside after a video review, Nylander made it 2-1 with 3:10 left in the second on his eighth goal in the last 10 games.

Namestnikov tied it at 1 on his first goal in 24 games 2:22 after Marner’s goal.

Stamkos was honored pregame after becoming the first Lightning player and 95th in the NHL to reach 1,000 points Thursday night at Philadelphia.

He received a Tiffany Crystal from Don VanMassenhoven, who represented the NHL, and an engraved gold stick from Tampa Bay owner Jeff Vinik.

Stamkos set the Lightning record with an 18-game point streak at Toronto on Mar. 11, 2009 and said he remembers it "like it was yesterday because my sticks got stolen after the game at the Toronto airport."

Lightning RW Corey Perry had two assists in his 1,200th game. He is the 122nd NHL player to reach the milestone. ... Tampa Bay has a power-play goal in 10 straight games. ... The Lightning have allowed an NHL-high six shorthanded goals. ... Toronto C Auston Matthews had an assist and eight shots.