Giannis Antetokounmpo ended one of the greatest NBA Finals ever with 50 points — and a championship Milwaukee waited 50 years to win again.

MILWAUKEE - Giannis Antetokounmpo ended one of the greatest NBA Finals ever with 50 points and a championship Milwaukee waited 50 years to win again.

Antetokounmpo added 14 rebounds and five blocked shots as the Bucks beat the Phoenix Suns 105-98 on Tuesday night to win the series 4-2. It was the third game this series with at least 40 points and 10 rebounds for Antetokounmpo, a dominant debut finals performance that takes its place among some of the game's greatest.

He shot 16 for 25 from the field and made an unbelievable 17-of-19 free throws — a spectacular showing for any shooter, let alone one who was hitting just 55.6% in the postseason and was ridiculed for it at times.

Moments after the Bucks won the NBA championship on their home court, fans were able to get their hands on championship gear at the Pro Shop in the Deer District.

"People told me I can’t make free throws and I made them tonight. And I’m a freaking champion," Antetokounmpo said.

He hopped around the court waving his arms with 20 seconds remaining to encourage fans to cheer, but there was no need. Their voices had been booming inside and outside for hours by then, having waited 50 years to celebrate a winner after Lew Alcindor — before becoming Kareem Abdul-Jabbar — and Oscar Robertson led the Bucks to the championship in 1971.

In a season played played largely without fans, the Bucks had 65,000 of them packed into the Deer District outside, a wild party that figured to last deep into the Midwestern night. The party wasn't bad inside, either: Confetti rained down inside as fans chanted "Bucks in 6! Bucks in 6!" — a hopeful boast by former player that turned out to be a prophetic rallying cry.

The Bucks became the fifth team to win the NBA Finals after trailing 2-0 and the first to do it by winning the next four games since Miami against Dallas in 2006. 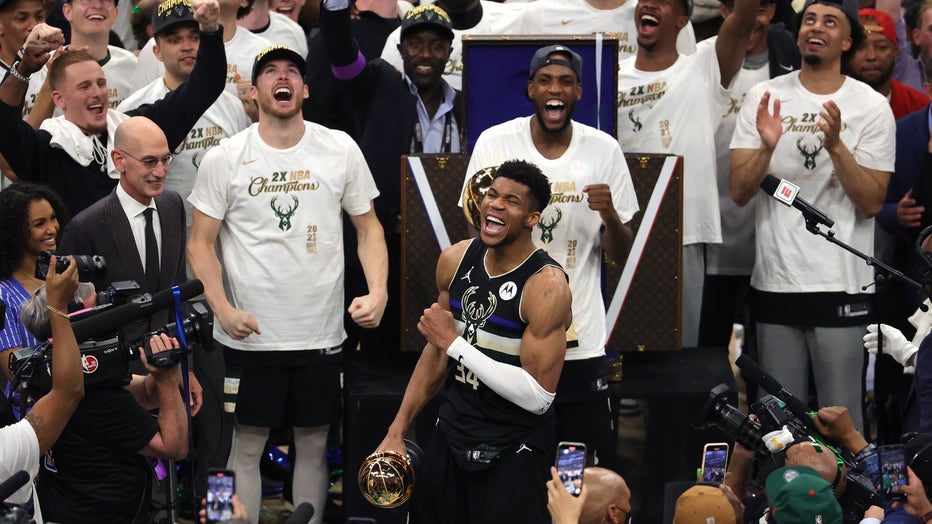 Chris Paul scored 26 points to end his first NBA Finals appearance in his 16th season. Devin Booker added 19 points but shot just 8 for 22 and missed all seven 3-pointers after scoring 40 points in each of the last two games.

"There’s just a pain that goes with your season being over," Suns coach Monty Williams said. "But I’ve never dealt with this and so I’m grateful, like I said, but I know this is going to hurt for a while."

The teams that came into the NBA together as expansion clubs in 1968 delivered a fine finals, with the last three games all in the balance deep into the fourth quarter. 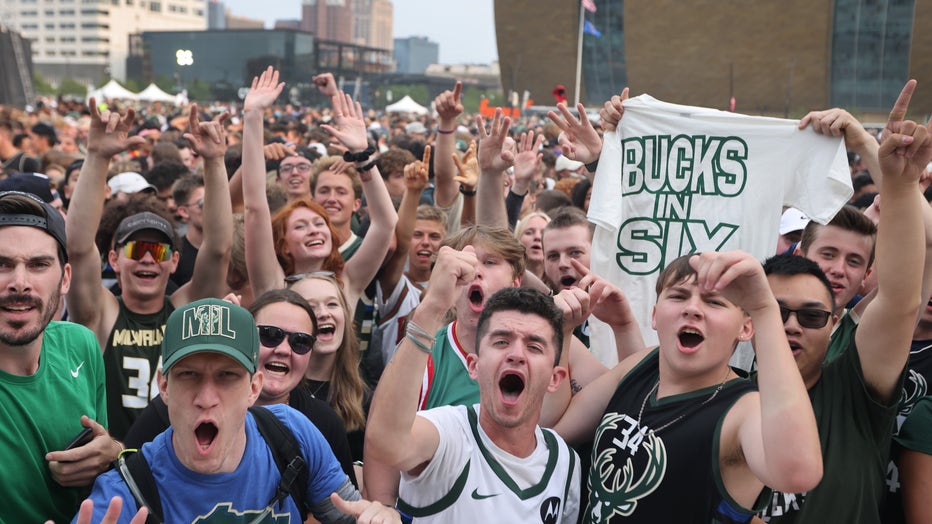 MILWAUKEE, WISCONSIN - JULY 20: Basketball fans gather outside Fiserv Forum as the Milwaukee Bucks prepare to face the Phoenix Suns in Game Six of the NBA Finals on July 20, 2021 in Milwaukee, Wisconsin. The Bucks lead the Suns 3-2 in the series. (Ph

The Bucks won them largely because of Antetokounmpo, a two-time MVP in the regular season who raised his game even higher in the finals and was voted the unanimous NBA Finals MVP.

He was the star of these finals in every way, from his powerful play on the court to his humble thoughts in interviews to taking time after Tuesday night's win to find children to high-five amid the celebrations. And he did it all after missing the final two games of the Eastern Conference finals with a hyperextended left knee, an injury that at first he feared could be serious to end his season.

Just think what people would have missed.

Khris Middleton scored 17 points for the Bucks and Bobby Portis came off the bench with 16. Jrue Holiday had 12 points, 11 assists and nine rebounds to go along with his usual sturdy defense that helped finally cool off Booker.

MILWAUKEE, WISCONSIN - JULY 20: Brook Lopez #11 of the Milwaukee Bucks reacts to a dunk against the Phoenix Suns during the second half in Game Six of the NBA Finals at Fiserv Forum on July 20, 2021 in Milwaukee, Wisconsin. NOTE TO USER: User express

The Bucks won just 15 games in 2013-14 when Antetokounmpo was a rookie after the forward from Greece was taken with the No. 15 pick. Middleton was beginning his second NBA season after the Bucks had acquired the second-round pick in a trade with Detroit that summer.

What started as a gradual time sped up in the last few years and the Bucks thought they might be here the last two seasons. They had the NBA’s best record in 2018-19 but blew a 2-0 lead against Toronto in the Eastern Conference finals.

They came back with the best record again last season but never regained their momentum after the season was suspended because of the coronavirus pandemic in March. They were eliminated in the second round by Miami in the bubble. 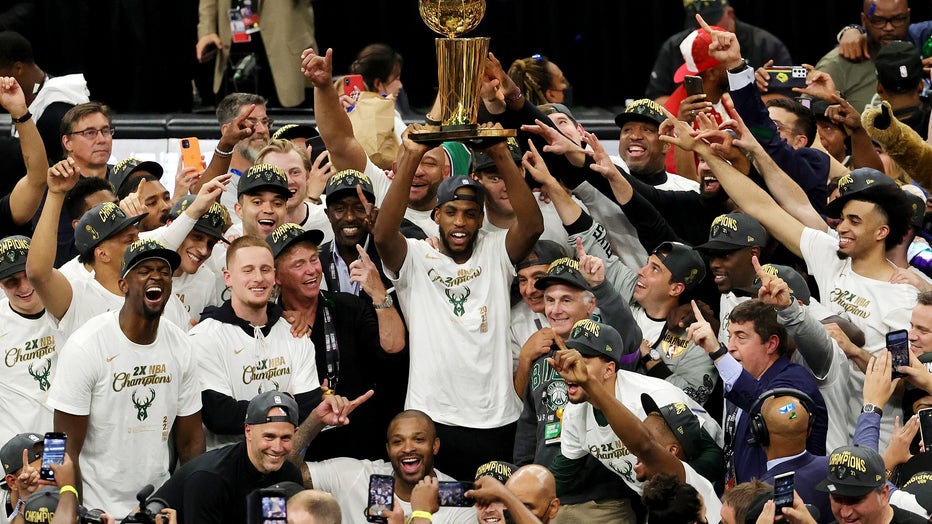 MILWAUKEE, WISCONSIN - JULY 20: Khris Middleton #22 and members of the Milwaukee Bucks celebrate after defeating the Phoenix Suns in Game Six to win the 2021 NBA Finals at Fiserv Forum on July 20, 2021 in Milwaukee, Wisconsin. NOTE TO USER: User expr

The Bucks traded for Holiday before this season and even though they weren’t quite as strong in the regular season, they were finally NBA Finals ready.

And Milwaukee was ready for the moment.

"I think it’s just a credit to the players," Bucks coach Mike Budenholzer said. "We’ve been pushing. We’ve been trying to get better. The players embrace everything. They’re amazingly coachable. They take it, soak it in and make the best of it."

Fans began filling the streets and restaurants in the afternoon on what felt like a holiday in Milwaukee. The Brewers moved up the start time of their home game against Kansas City to be played in the afternoon to accommodate Milwaukee fans — and Brewers star Christian Yelich, who was part of the crowd inside Fiserv Forum.

The game was tied at 77 after three quarters but Antetokoumpo had 13 points in the fourth to make sure Milwaukee wouldn't have to go back to Phoenix for Game 7 on Thursday.

The Suns returned to the postseason for the first time since 2010 but remain without a title and have never won more than two games in their three appearances in the NBA Finals.

"Nobody probably expected us to be where we are except for us," Paul said. "But it is what it is. Like I said all season long with our team, ain’t no moral victories."

"Throughout the post season, the Bucks showed how perseverance, talent, and teamwork can lead to a championship. We couldn’t be more excited for the Bucks organization, the city of Milwaukee and the great fans throughout the state of Wisconsin. This is a source of tremendous pride for fans of all Wisconsin sports, including everyone in the Brewers organization."

"Congratulations to the Milwaukee Bucks on their remarkable run to an NBA championship. This is what we envisioned in supporting a new arena that gave this region an added asset to shine. This is a great result for the team, its fans, the region and entire state. And it couldn’t have come at a better time.

"This is one of so many signs of Milwaukee’s momentum. The Bucks’ play on the court matched what occurred off the court. The Deer District brought together people from every background. The remarkable energy – home or away – showed an international audience what we already knew: Milwaukee is a place you want to be.

"For talented workers looking for a new place to build their career, or companies looking for a new location where they can thrive, perhaps the great scenes they’ve seen during the Bucks’ playoff run will spark their curiosity and open the door to discover the Milwaukee Region.

"We’re proud to support the Bucks. They’ve been an MMAC member since 1977. We’re proud to have supported the team’s push to build Fiserv Forum. We knew the value of ensuring that Milwaukee remains a major league city  – and, today, a championship city.

"Thank you to the ownership group, to Sen. Kohl, to all the elected officials who supported financing for Fiserv Forum, and to the herd of fans who pulled for their team.

"Milwaukee is a humble place – too humble, some might say. But not today. Thank you, Bucks, for giving us something to brag about for years to come."

"I want to congratulate the Milwaukee Bucks on bringing home the trophy for our whole city, and in fact, our whole State, to enjoy. This has been an incredible run where our team has shown some of the best characteristics of Wisconsinites such as their ability to overcome adversity, having trailed two games to none in multiple series during these playoffs. Yet, they kept working and preserved and now have the sweet satisfaction that comes with being called champions!

"Milwaukeeans have been hungry for another NBA championship since the days of Kareem Abdul-Jabbar and his famous ‘sky hook.’ I am so proud of our team and can’t wait for the COVID-19 safe victory parade!"

The experience at the Deer District will be unlike any other -- with the new screens added to the outdoor space.