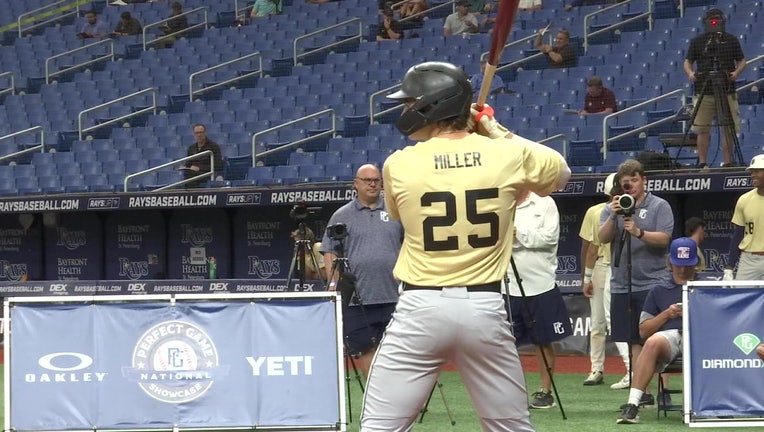 Today, it was inside Tropicana Field in St. Petersburg, taking part in the Perfect Game National Showcase. Last Thursday, however, Miller took the field in the National High School All-Star game at Dodger Stadium as part of MLB’s All-Star Weekend.

Miller wouldn’t miss his chance in the West Coast sun and wound up going 4-5 at the plate helping his American League team defeat the National League all-stars.

"Going to Dodger Stadium is a dream I've had since I was six years old, so it was an incredible experience," Miller said.

Two days later, however, Miller was back up to bat on the same field, this time competing in the High School Home Run Derby. Miller walked away as the overall home run champ there too.

Right now, Miller is already ranked as one of the best high school players in the class of 2023 and after the weekend he just had, his stock only continues to rise.

"I think he's proving what his stock always was, because we've valued him from the start," said Perfect Game Senior Director of Scouting Jared Goodwin.

Goodwin said he’s seen Miller play since the shortstop was 13 years old and Miller is still living up to the hype.

"That's what he's proving more than anything," said Goodwin. "The tools are the tools, the skills are the skills, and he can produce from game one to game 162 when he's ready."

For now, however, the Arkansas baseball commit is just enjoying his time.

"I think it's all worked out," said Miller. "I've worked so hard, and it's awesome to see it all pay off."