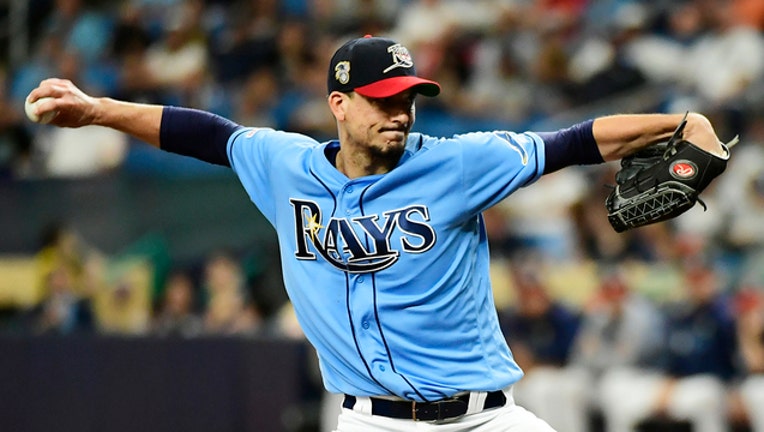 Emilio Pagan, the fourth Tampa Bay reliever, worked the ninth to get his fifth save and complete the five-hitter.

Brett Gardner homered and James Paxton (5-4) gave up two runs and seven hits with 11 strikeouts over six innings for the Yankees, who have a 6 1/2 lead over Tampa Bay.

New York took the first two games of the series, both in extra innings, before the Rays won Saturday on Travis d'Arnaud's tiebreaking solo homer with two outs in the ninth.

d'Arnaud doubled leading off the first and scored when second-place hitter Tommy Pham hit a liner to center that resulted in a double when the Yankees left second base uncovered.

Pham went to third on Yandy Diaz's single and came home to put the Rays up 2-0 on a grounder by Avisail Garcia.

Gardner homered for the third consecutive game on a second-inning solo shot. It was his third homer in 17 at-bats against Morton.

Morton worked out of a two-on, no-out jam in the third by striking out Aaron Hicks and Aaron Judge, and getting a fly ball from Didi Gregorius.

Judge struck out in all three at-bats against Morton.

Yankees All-Star INFs DJ LeMahieu and Gleyber Torres were out of the starting lineup. "Just feel like both of those guys need a day," manager Aaron Boone said. "These are guys that we've leaned on heavily. We've been through a really tough stretch of games with obviously going over to London." New York C Gary Sanchez was the DH, while Rays OF Austin Meadows also got a break.

Yankees: Luke Voit (abdominal strain) ran and did agility drills in the outfield, and worked out at first base. He could be back Friday.

Rays: RHP Tyler Glasnow, out since May 11 with a strained right forearm, will resume throwing in about a week. "We're really encouraged by the way he feels," manager Kevin Cash said. "We'll get him throwing again and see where we go."