Nunez-Rouches tries out trash-talk on Brady

TAMPA, Fla. - Nacho is the perfect nickname for Rakeem Nunez-Rouches because you can always hear where he is on the field.

"He be on the field, you're going to hear Nacho,” said Jason Pierre-Paul. "That's a player that you need right there. He's going to give you his all. Nacho is one of my good friends."

Nacho is always talking and usually it's to get in the opponent’s ear.

"He’s the best trash-talker we’ve got on defense right now,” said Bruce Arians. "Some of the DBs, but Nacho (Rakeem Nunez-Roches) does the best job over there.”

‘‘Oh yeah, I’m trash talking to Brady,” Nunez-Roches said. ’‘I told him (Sunday), ‘I see you struggling over there, No. 12.’ ‘He said, ‘I love it, Nacho!’ And I was kind of like starstruck. I was like, ‘Tom Brady is talking to me?’ Sometimes, you forget that that’s your teammate, because you compete so much." 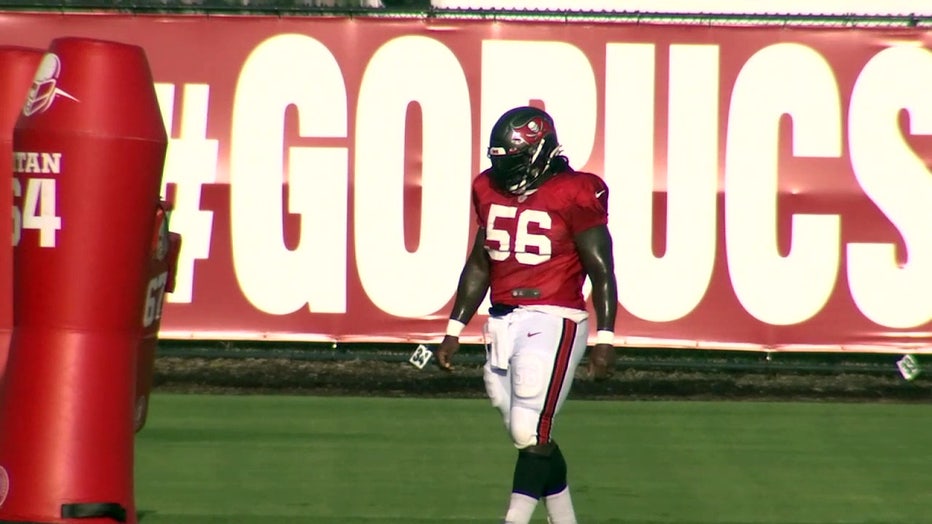 Nacho is more than talk. In fact, Bruce Arians says he's had a heck of a camp and Bucs defensive coordinator Todd Bowles couldn't agree more.

“Right now, in a week and a half, he’s been the most improved player,’' Bowles said last week. ’‘I think he’s changed his upper body — he looks more stout and he looks quicker. He’s more explosive, he looks more powerful right now and he’s adapted to the scheme and understanding things well. He’s taking advantage of the situation.”

If Nacho's game can equal his gift of gab, the Bucs’ defense will have a plenty to talk about.