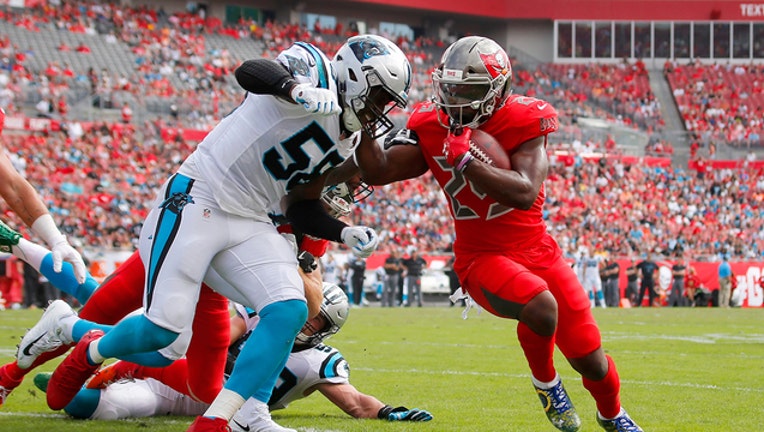 Thomas Davis (58) of the Carolina Panthers drives Peyton Barber (25) of the Tampa Bay Buccaneers out of bounds near the goal line during the regular season game on December 02, 2018 in Tampa. (Photo by Cliff Welch/Icon Sportswire via Getty Images)

Cam Newton enjoys facing the Buccaneers. The only thing is, this might not be the same Panthers quarterback who has thrown for 29 touchdowns against Tampa Bay.

Newton was so-so in the opening loss to the Rams, and his minus-2 yards rushing were a career low. He did go 25 for 38 for 239 yards, but had no touchdowns and one interception. Had it not been for the yeoman effort of running back Christian McCaffrey (128 yards rushing, two scores; 10 receptions for 81 yards), a 30-27 defeat would have been a rout.

Coming off shoulder problems, Newton threw only one pass beyond 20 yards, hardly his usual mode of operation. But he insists he's healthy.

"You are only asking me because of my shoulder," Newton said of all the check-downs against the Rams. "How about this, talk to the defensive coordinator for Tampa and ask if they don't think I can throw the ball over 20 yards and see how far that gets you?"

The Buccaneers didn't get very far at home vs. the 49ers, falling by 14 points. They had even more problems in the passing game as Jameis Winston threw two pick-6s against a San Francisco defense that didn't even know what a takeaway was last season.

KNOCKOUT POOL: The Seahawks squeezed by Cincinnati, and so did Pro Picks. Is there anyone out there who is not picking NEW ENGLAND this week at Miami?

We repeat, is there anyone out there who is not picking New England this week? AP Pro32 has this one right: top vs. bottom.

Raiders might be better than we thought and will keep it close.

Bills seem like host in Meadowlands with second straight game there, this time a loss.

Were high hopes for both clubs a mirage?

Beginning to wonder about Matt Patricia's defensive acumen in Detroit.

Beginning to wonder about Doug Marrone's security in Jacksonville.

Steelers can't be that bad, can they?

Barring a tie, one of these teams will have nice jump-start to NFC North title.

Eagles and Falcons seem to fly into each other every year.

Upset special: 1-0 against spread, 1-0 straight up