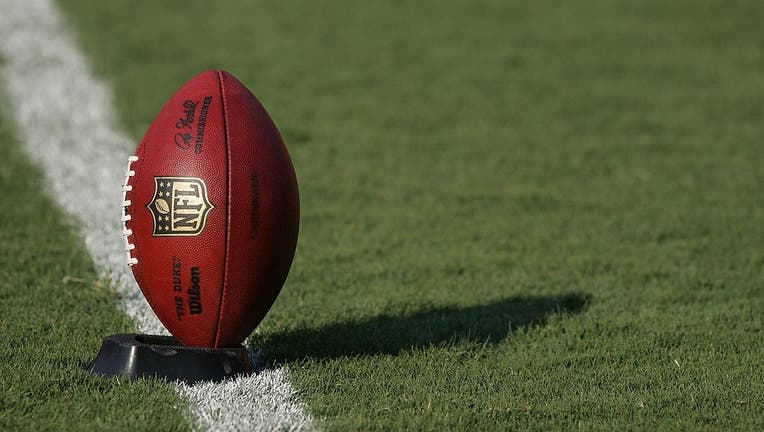 A ball with the new NFL shield logo on a tee before a game against the Kansas City Chiefs at Arrowhead Stadium in Kansas City, Missouri on Aug. 16, 2008. (Photo by Gene Lower/Getty Images)

NEW YORK (AP) - Only unvaccinated players and those experiencing possible symptoms of COVID-19 will be tested, starting Sunday, under the NFL’s revised protocols.

Also, higher risk players have until 2 p.m. Monday to send written notice if they choose to opt out, according to a memo sent to clubs on Saturday and obtained by The Associated Press. The players will not be paid and the notice is irrevocable.

"Medical information strongly indicates that this variant is significantly more contagious but possibly less severe than prior variants, particularly for people who are fully vaccinated and have received a booster shot," NFL Commissioner Roger Goodell said in another memo sent to clubs. "Our experience with the omicron variant is fully consistent with this expectation – while more players and staff are testing positive, roughly two- thirds of those individuals are asymptomatic, most of the remaining individuals have only mild symptoms, and the virus appears to clear positive individuals more rapidly than was true with the delta or earlier variants. In many respects, omicron appears to be a very different illness from the one that we first confronted in the spring of 2020."

On Friday, the league moved three games scheduled for this weekend because of COVID-19 outbreaks: Las Vegas at Cleveland from Saturday to Monday; and Seattle at the Los Angeles Rams and Washington at Philadelphia from Sunday to Tuesday.

In addition to the targeted testing plan and the opt-out option, the new protocols give more flexibility for players to attend meetings virtually.

Earlier this week, the league and the NFL Players Association updated protocols to allow asymptomatic vaccinated players to return sooner if they have two negative tests on the same day, or one negative test and an antibody test shows the individual has reached a certain level.

Dr. Tony Casolaro, chief medical officer for Washington, said in a conference call that 21 of 23 players on the team who tested positive would’ve been able to practice based on mild symptoms.

"We will continue to monitor medical and public health developments, both generally and at each club, and be prepared to adjust protocols further as conditions warrant, including to introduce greater flexibility based on medical considerations," Goodell said.

FOX has produced a documentary about the life and career of legendary NFL coach and broadcaster John Madden.

Previously, the NFL did not plan to move any games because of coronavirus outbreaks. It even said forfeits "could be in play." But recent developments with the omicron strain of COVID-19 has changed the league’s thinking — as did several outbreaks across the league entering Week 15 of the season.

The Browns had another starting lineman test positive as they practiced indoors Saturday in preparation for the Raiders.

With the league relaxing testing protocols, it’s possible the Browns could get some players back in time for the Raiders.

"If guys make it back, that’s great," said coach Kevin Stefanski, who also is sidelined after testing positive. "If they don’t, we’ll be just fine."

Elsewhere, the Chicago Bears activated nose tackle Eddie Goldman from the reserve/COVID-19 list on Saturday, clearing the way for him to play in game Monday night against Minnesota.

Goldman was placed on the list on Tuesday. The Bears had 12 players on it after activating him, including receiver Allen Robinson and safety Eddie Jackson.