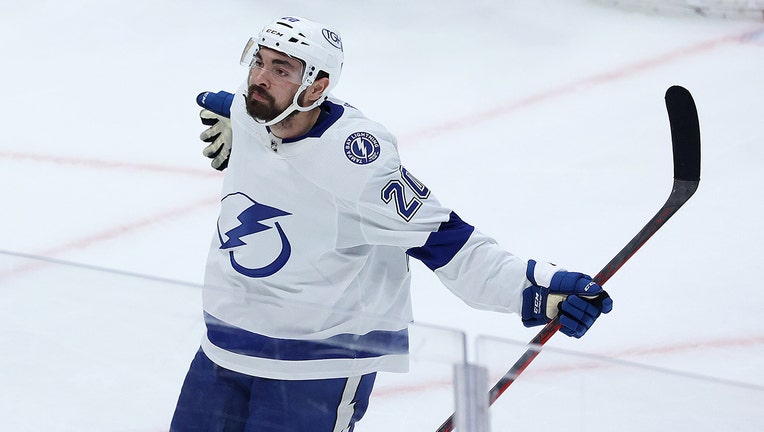 TORONTO, ON- MAY 14 - Tampa Bay Lightning left wing Nicholas Paul (20) celebrates after scoring his second of the night as the Toronto Maple Leafs play the Tampa Bay Lightning in game seven of their first round NHL playoff series at Scotiabank Arena

The forward signed a 7-year contract extension, the team announced Friday. Negotiations with players’ agents began soon after the Stanley Cup Final, and Paul — acquired from Ottawa at the trade deadline — stressed Tuesday that he’d like to remain with the Lightning after getting the first taste of playoff hockey in his career.

"I obviously love it here," Paul said earlier in the week. And his wish came true.

After becoming a Bolt, the 27-year-old skated in 21 games for the Lightning during the regular season after joining the team prior to the trade deadline and recorded five goals, 14 points and a plus-four rating while winning 56 percent of his face-offs.

READ: 'Is that the Stanley Cup?' Iconic trophy accidentally delivered to wrong house

He played in all 23 postseason games and netted five goals. His first two career playoff goals occurred in Game 7 in the First Round series against the Toronto Blue Jay.

Paul was acquired in March from the Ottawa Senators in exchange for forward Mathieu Joseph and Tampa Bay's own fourth-round selection in the 2024 NHL Draft.