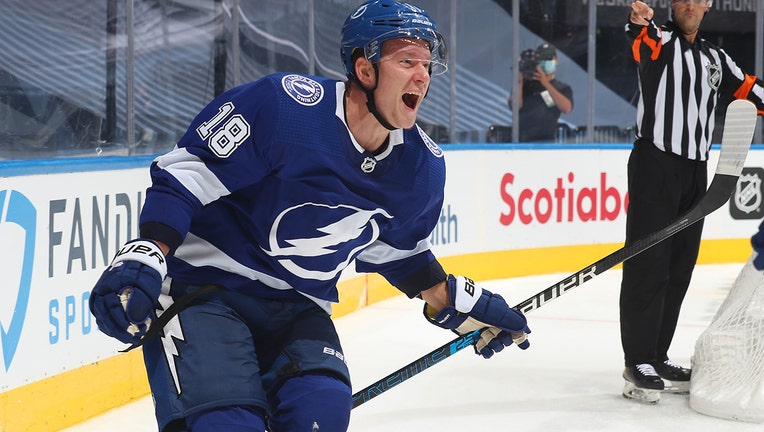 Ondrej Palat scores in the first overtime period for the 4-3 win in Game Two of the Eastern Conference Second Round of the 2020 NHL Stanley Cup Playoff on August 25, 2020 in Toronto, Ontario. (Chase Agnello-Dean/NHLI/Getty Images)

TORONTO, Canada - Ondrej Palat scored at 4:40 of overtime to give the Tampa Bay Lightning a 4-3 wi over te Boston Bruins on Tuesday night, evening their Eastern Confrence semifinal series at one game apiece.

Game 3 of the best-of-seven matchup is Wednesday night in Toronto.

Blake Coleman had two goals and Nikita Kucherov also scored for Tampa Bay. Kucherov tied it 2-2 with 4 1/2 minutes left in the second period, ad Coleman's second of the game put the Lightning ahead with 9:20 left in the third.

Brad Marchand’s second goal of the night, off a nifty feed from Sean Kuraly, tied it 3-3 with just under 4 minutes to go in regulation.

The Lightning outshot the Bruins 40-25, including 9-1 in overtime.

Nick Ritchie also scored for the Bruins, and Jaroslav Halak finished with 36 saves.

David Pastrnak, the league’s leading scorer during the regular season, had the primary assist on Marchand’s power-play goal at 14:33 of the second period. He picked up another assist on the goal that tied it in the third.

The Lightning, who trailed 3-0 before scoring in Game 1, had a goal by Barclay Goodrow disallowed in the opening period when the Bruins successfully challenged that Tampa Bay’s Brayden Point was offside seconds before the apparent score that would have have erased Boston’s early 1-0 lead.

Instead of dwelling on the reversal, the Lightning kept working until Coleman’s diving shot off a feed from Zach Bogosian made it 1-1 at 12:42 of the opening period. It remained tied after Marchand scored for Boston and Nikita Kucherov countered for Tampa Bay within a 55-second span of the second period.

NOTES: The Lightning played without D Ryan McDonagh, who was injured during the third period of Game 1. Coach Jon Cooper inserted both Braydon Coburn and Luke Schenn into the lineup, electing to go with seven defensemen and 11 forwards. Neither Coburn nor Schenn had appeared in the team’s first nine playoff games. ... Boston’s David Krejci’s career-best playoff point streak (three goals, seven assists, 10 points) ended at seven games. It was the team’s longest since Patrice Bergeron had a seven-game streak in 2014. ... The Lightning have gone seven consecutive games without a power-play goal, going 0-for-15 during the stretch. They were 0-for-2 Tuesday night and are 2-for-20 this postseason.