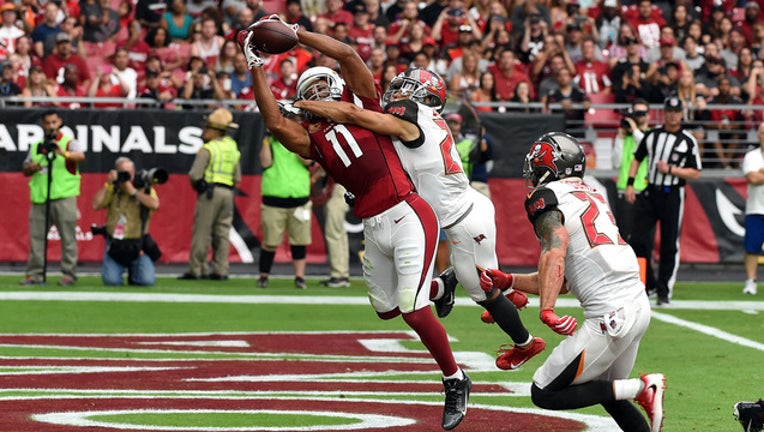 Wide receiver Larry Fitzgerald of the Arizona Cardinals makes a catch for a touchdown over cornerback Brent Grimes of the Tampa Bay Buccaneers. (Photo by Norm Hall/Getty Images)

GLENDALE, Ariz. (AP) — The Arizona Cardinals looked like the team they are supposed to be, often at the expense of Jameis Winston.

Carson Palmer threw for 308 yards and three touchdowns, and the Cardinals intercepted Winston four times in a 40-7 rout of the Tampa Bay Buccaneers on Sunday.

Marcus Cooper, acquired for a conditional draft pick in a trade with Kansas City on Sept. 2, had two interceptions, returning the second 60 yards for a score. Winston also fumbled the ball away once.

"It is a humbling league," Tampa Bay coach Dirk Koetter said. "We got humbled today."

Winston, who had four touchdown passes against Atlanta in the opener and was NFC player of the week, threw 51 passes, the most in his two NFL seasons, completing 27 for 243 yards.

"We played one of the best defenses in the league," Winston said, "but all those interceptions are on me."

Palmer completed 18 of 31 passes with no interceptions before sitting out most of the fourth quarter.

The Cardinals lost at home to a depleted New England team in their season opener and bounced back in a big way.

"There was too much holding your breath (against the Patriots)," Arizona coach Bruce Arians said. "I thought we cut it loose today."

All three of Palmer's scoring passes came in the first half, to Larry Fitzgerald, Michael Floyd and Jaron Brown.

The Cardinals (1-1), coming off a season-opening home loss to New England, scored two touchdowns in a 1:16 span in the final two minutes of the first half for a 24-0 lead into the break.

Winston had an especially rough first 30 minutes, completing 11 of 20 for 77 yards with two interceptions and a fumble.

Tampa Bay took the second-half kickoff and drove for a score. Mike Evans beating Patrick Peterson for a 19-yard TD.

The Buccaneers (1-1) got the ball back and were driving again when defensive lineman Josh Mauro tipped Winston's pass. Cooper grabbed it and outran defenders down the sideline to make it 33-7.

NEW CORNERBACK?: Arians said the plan was for rookie Brandon Williams and Cooper to alternate series, but once Cooper was in, he stayed in.

Now Cooper may have the job all to himself.

"We'll see how it goes," Arians said. "He could potentially be the starter over there."

QUICK STRIKE: The Buccaneers were on their best drive of the first half when running back Charles Sims III brushed against Winston and the ball popped loose. Tony Jefferson recovered for Arizona at the Cardinals 29.

After the fumble recovery, Palmer's 24-yard pass to Fitzgerald eventually put the ball at the Tampa Bay 1. On third down, Palmer hit Michael Floyd in the back of the end zone and it was 17-0 with 1:36 to go in the half.

A quick three-and-out by the Buccaneers gave the Cardinals the ball at their 26, plenty of time for a high-octane offense finally getting in gear.

Jaron Brown got behind the defense and gathered in a perfect pass from Palmer for a 51-yard touchdown with 20 seconds still remaining until halftime.

Cooper returned an interception 23 yards to the Tampa Bay 19, leading to an Arizona field goal.

The third pick was Cooper again, for a touchdown. Winston's fourth interception came on the game's last play.

DO-EVERYTHING JOHNSON: The Buccaneers held David Johnson to 45 yards rushing in 12 attempts, but he caught three passes for 98 yards. The longest came on a check-down from Palmer, a play that went for 58 yards.

"I don't think you can find a weakness in his game," Palmer said.

NO SUBSTITUTION: Koetter got irritated when reporters kept questioning him on why he left Winston in the game when the outcome long had been determined.

"You could criticize me all you want," Koetter said. "He stayed in. The decision is made. So write what you are going to write."

First, they lost tight Luke Stocker (ankle) in the first quarter. And after a 1-yard gain on Tampa Bay's first play of the second quarter, standout RB Doug Martin left with a hamstring injury.