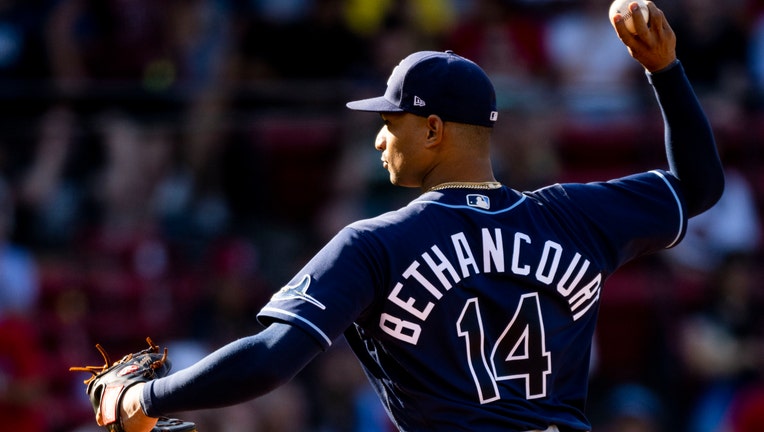 BOSTON, MA - AUGUST 28: Christian Bethancourt #14 of the Tampa Bay Rays pitches during the ninth inning of a game against the Boston Red Sox on August 28, 2022 at Fenway Park in Boston, Massachusetts.(Photo by Billie Weiss/Boston Red Sox/Getty Images

BOSTON, Mass. - Isaac Paredes homered over the Green Monster in each of his first two at-bats and the Tampa Bay Rays avoided a three-game sweep by beating the Boston Red Sox 12-4 on Sunday.

Randy Arozarena hit three doubles off the left-field wall at Fenway Park and drove in two runs. David Peralta had three hits with two RBI doubles for the Rays, who came to town on a six-game winning streak before losing two straight.

"This was a big one today," Rays manager Kevin Cash said. "We wanted to win this game. Even though we didn't win the series, but we go into the off day feeling good. Very encouraged and impressed by the way the guys have thrown the ball, kind of led by our starting pitching."

J.D. Martinez, Tommy Pham and Franchy Cordero all hit solo homers for the Red Sox, with Martinez’s 10th of the season ending his homerless drought at 129 at-bats. Boston, which has faded in the wild-card chase, has lost five of seven.

"It felt good. It's been a while. Always good to hit a homer," Martinez said in the middle of quiet clubhouse. "Been grinding the last three months. ... All we can do is just control what we can control. Keep grinding and I know that I work as hard, if not harder than anyone, and I'm not going to stop until I get it right."

"His swing's been getting better," he said. "Not chasing some of these pitches. Little by little he's been putting quality at-bats and hitting the ball hard."

Rays catcher Christian Bethancourt came out from behind the plate and pitched a scoreless ninth, getting reaction from the crowd when his second pitch to Bobby Dalbec was a 42 mph curveball.

"Cash asked me if I wanted to and I said: ‘Yeah, I want to pitch in Fenway,’'' he said, smiling. "Just to do it. Just another way to help the team to help save the bullpen."

Paredes’ second homer — his 18th — gave the Rays a 4-1 lead in the fourth before Martinez belted his first since just before the All-Star break in the bottom half, clearing the left-field wall.

"It definitely surprises me," Paredes said through an interpreter about his homer output in just 81 games. "I can't really explain it."

Peralta’s RBI double made it 5-2 before Pham hit his 15th.

The Rays then took charge, scoring three in the sixth when Arozarena had an RBI double, Harold Ramírez a run-scoring single and Manuel Margot a sacrifice fly. They added four more in the eighth when Arozarena hit his third double, which drove in a run.

Paredes’ first homer was the result of an overturned call after a brief replay review showed the ball clearly went over a red line — signifying out of play — on top of the Monster, hitting the ledge of a tabletop.

Tampa Bay hit two homers over the Monster and six balls off it. The Red Sox also hit two over the Wall.

Peralta tripped over the third-base bag, landing awkwardly advancing on an infield hit before he got up smiling when some of his teammates in the dugout appeared to be teasing him.

GIVE THEM A BREAK

The Rays ended a stretch of 17 games in 17 days on Sunday.

Rays: INF Brandon Lowe didn’t play for the second straight game after getting hit on the right elbow with a fastball from former teammate Michael Wacha Friday and leaving early.

Rays: Off Monday before opening a two-game series Tuesday at Miami. LHP Shane McClanahan (11-5, 2.20 ERA) is set to start.