Zephyrhills star is ready for his chance to run

ZEPHYRHILLS, Fla. - Former Zephyrhills Christian Academy Warrior Evan Miller is a sprinter, but he knows all about dealing with hurdles.

"For me, track was kind of a last resort," Miller told FOX 13 Sports "I had an injury the summer before my senior year of football. I was unable to play."

"Track was the last option to get to the college level."

Knowing he wanted an athletic scholarship, Miller looked to track. Initially his times were far from recruitable, but he kept at it. Miller also teamed up with local running coach BB Roberts. From there, Miller's progress took off.

"He kept winning track meets," Roberts said. "One track meet I went to, I'll never forget, he (set) a lot (of personal records). I smiled and I said, 'I created a monster.'"

Despite personal records, wins, and a state championship, Miller was receiving zero interest from college universities.

"I didn't really know how to handle it," Miller admitted. "I just kept working, and did what I could."

That persistence would eventually pay off in the form of a last-minute offer from the University of South Carolina. Since then. Miller has been one of the Gamecocks' top sprinters. 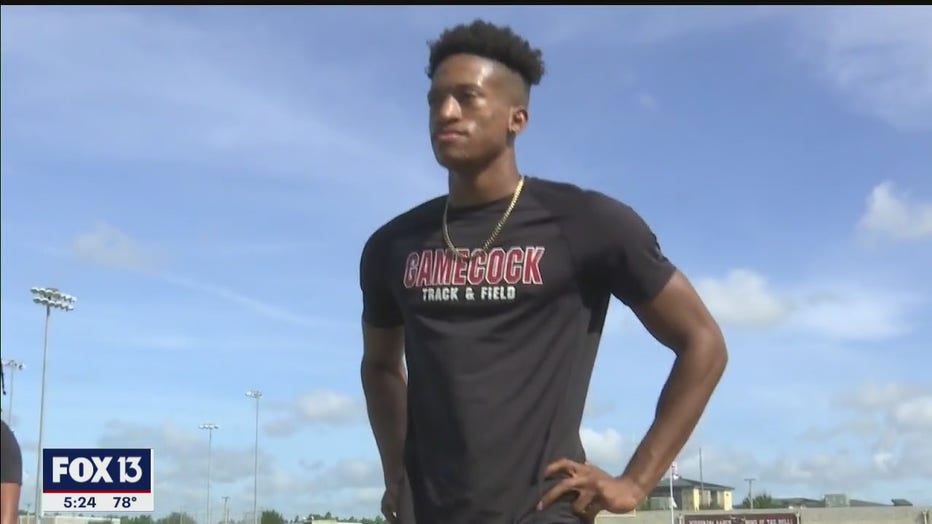 Miller was training to qualify for the Tokyo Summer Olympics until the COVID-19 pandemic pushed the games back by a year. That turned out to be a blessing in disguise for Miller, who was struggling to hit his run times.

"Definitely don't bet money against this guy. This guy is incredible," Roberts added. "He's a monster. He's been called to run track and field so I wouldn't bet against him."