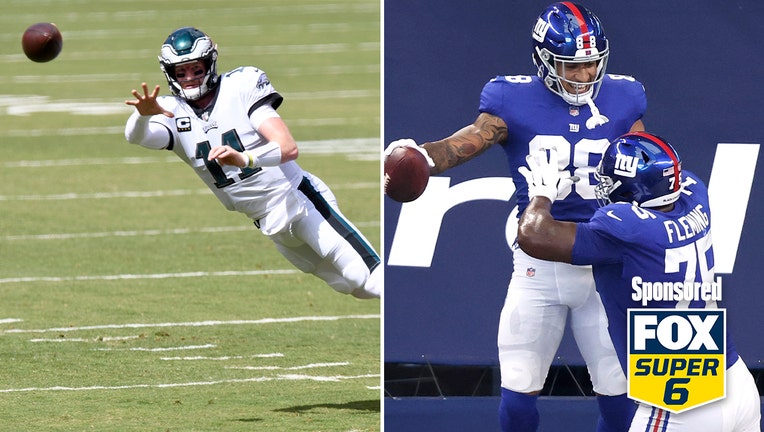 LEFT: Carson Wentz #11 of the Philadelphia Eagles throws a pass in the first quarter against the Washington Football Team at FedExField on September 13, 2020 in Landover, Maryland. (Photo by Greg Fiume/Getty Images)RIGHT: Evan Engram #88 of the New Y

Someone will win the NFC East. And when two of the oldest rivals in football clash on Thursday Night Football, you could end up being a big winner yourself.

The New York Giants will travel down the New Jersey Turnpike to face Carson Wentz and the Philadelphia Eagles in a critical game for both sides to stay alive in the NFC East race.

There’s a ton on the line for both – and possibly for you when you play FOX’s Super 6 game. Just download the app, answer six questions correctly and you could win up to $25,000 in Terry Bradshaw’s money.

Here’s what you should be watching out for before loading up the app and making your selections on FOX’s Super 6.

How will the first TD of in the 2nd half be scored?
The answers are Eagles rushing, Eagles passing, Giants rushing, Giants passing, any other way (which includes special teams) and no touchdowns.

Both Carson Wentz and Daniel Jones have the ability to not just score with their arms, but to break through the end zone with their legs as well. Keep that in mind as you look at the rushing options.

How many touchdowns will Daniel Jones throw in the game?
The choices range everywhere in between from zero touchdowns to five-plus touchdowns.

In his last five games, Jones has thrown for only one touchdown combined after a two-touchdown performance against the Steelers on Opening Night. However, the Eagles have been exploited defensively this season.

How many touchdowns will the Eagles score in the game?
The options are 0-1, 2, 3, 4, 5 or 6+. Against the tough Baltimore defense, Wentz and the Eagle offense turned things on in the second half to rally thanks to four touchdowns. Division rivalries tend to get closer, but Philadelphia’s offense appears to have a spark lit.

Which player will have the most total yards?
The choices for the Eagles are Miles Sanders, Greg Ward and Travis Fulgham. Devonta Freeman and Darius Slayton are the choices from the Giants. There’s also a spot marked for a tie. It sounds like Sanders will miss Thursday night’s game with a knee injury, so there’s a possibility that spot could end up with Boston Scott taking a lot of snaps. Keep an eye of Fulgham who has become Philadelphia’s best big play receiver. Freeman has gotten more comfortable in New York’s backfield with the absence of Saquon Barkley.

Choose team to win & by how many points
This is a simple one: pick the winner and then find the point range that you feel the final margin of victory will be.

This is a must win for both sides with the Eagles in first game of three straight within the NFC East that will ultimately decide their fate within the race. They are beat up offensively along the line, but still possess more talent on paper. This game could determine if the NFC East’s champion in 2019 will even be in the discussion for the 2020 crown by the time November rolls around.

Make sure to make your choices by playing the FOX Super 6 for Thursday’s game. It’s easy, it’s free and you could win $25,000 of Terry Bradshaw’s money.