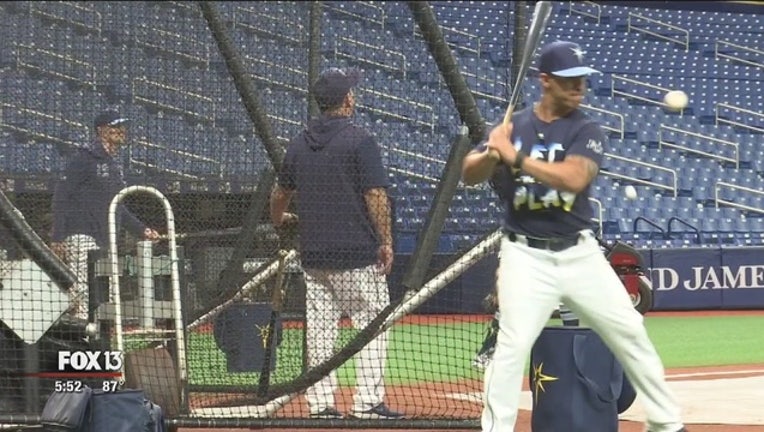 ST. PETERSBURG, Fla. (FOX 13) - It's been six years, but Kevin Kiermaier remembers all too well what the push for the playoffs is all about.

"It's fun but it's stressful at the same time," said Kiermaier. "You never know what's going to happen."

The Rays last playoff run was in 2013, during Kiermaier's first season with the Rays. He's the only remaining player inside the team's clubhouse from their last postseason appearance, including the Rays' skipper.

"It's no doubt that it's new to all of us," said Rays manager Kevin Cash. "It's new to myself, being in this position. I think staying calm and consistent is probably the best way to go about it."

They'll be scoreboard watching, too. If the season ended today, the Rays would be in, traveling to Oakland for a wild card game. But, the race for that second wild-card spot is a tight one. The Indians are just a half-game behind the Rays.

"This is a week where we need everyone to fire on all cylinders, collectively as a unit," said Kiermaier. "If we can do that more times than not, we'll be where we want to be."

This young ball club is one that won 90 games last year, and could still beat the record 97 wins they had when the Rays went all the way to the World Series back in 2008. That doesn't guarantee them a spot in the postseason, though.

"You know, there's definitely some pressure that it involves," said outfielder Austin Meadows. "We just go out there and play the game, like we've been doing all year. We know if we give it our best shot, we try our best out there, we fall short or we end up going to the playoffs, we know that we tried our best. That's what really matters."

Who knows how many more wins it will take for the Rays to clinch a playoff spot. They're just going to keep playing like it's their spot to lose.

"The beautiful thing about this game is that we control our own destiny," said Kiermaier. "I know other teams have to do with what's going to happen to us, but if we come to the field each and every day and handle our business, and win more ball games than not, that's putting ourselves in the best possible position to advance to the next step, and that's what we're trying to do."