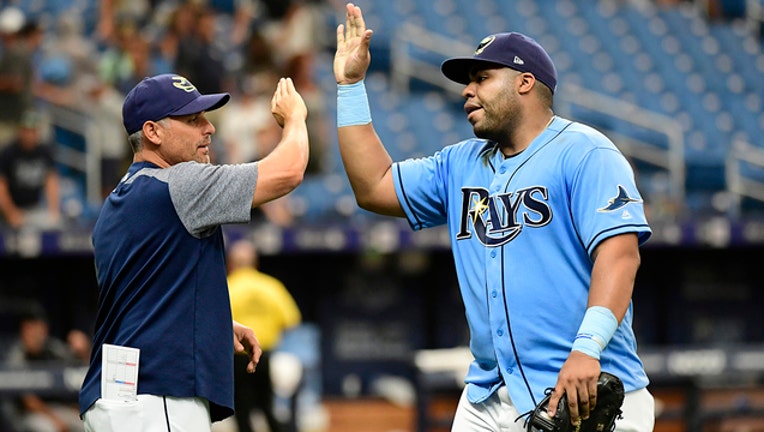 ST. PETERSBURG, Fla. (AP) - After getting a strong performance from Yonny Chirinos, the Tampa Bay Rays hope the right-hander can avoid the injured list.

Chirinos allowed one run in five innings before leaving with a hand injury, and the Rays beat the Miami Marlins 7-2 on Sunday to match their longest winning streak this season at six games.

"A little bit of concern," Tampa Bay manager Kevin Cash said. "We're going to get it checked out, for sure, and see how he bounces back tomorrow. Fingers, wrists, all those things are a little tricky."

Chirinos (9-5) gave up two hits but was pulled after 63 pitches due to right middle finger inflammation. Cash said the problem first developed during the fourth inning.

"Just felt a little uncomfortable on some pitches like the slider and the split," Chirinos said through a translator.

Tampa Bay already is without AL Cy Young Award winner Blake Snell (loose bodies in the left elbow) and Tyler Glasnow (right forearm strain). Both are expected to be sidelined into September.

Mike Brosseau and Jesús Aguilar both homered and had two RBIs each for the Rays, who also won six in a row from May 25-30. Tampa Bay has scored six or more runs in a team record seven straight games.

"When our offense is clicking like that and our pitching is what it has been all year. we're a tough team to beat," Brosseau said.

Brian Anderson homered for the Marlins, who have lost four of five and dropped to an NL-worst 42-67.

Caleb Smith (7-5) gave up three runs - one earned - six hits and four walks in five innings. He had been 4-0 in five starts since a June 6 loss at Milwaukee.

Aguilar had a sacrifice fly and Brosseau an RBI single during a two-run first, and Brosseau homered for a 3-0 lead in the third. All four of his previous homers had come against Baltimore.

Anderson hit a solo homer with two outs in the fourth for the Marlins' first hit.

Tampa Bay opened a 6-1 lead in the seventh when Travis d'Arnaud hit an RBI single against the shift and Avisail Garcia hit a two-run double. D'Arnaud has 27 RBIs in 22 games since July 1.

Aguilar homered in the eighth off Kyle Keller.

Marlins INF Neil Walker (jammed right index finger) didn't play but could be back soon. He collided with Tampa Bay's Kevin Kiermaier while fielding a grounder between home and first base Saturday.

With a number of promising infield prospects, Miami 2B Starlin Castro is taking grounders at third base.

Marlins: CF César Puello left after four innings with left hip flexor tightness and is expected to go on the injured list. ... RHP Ryne Stanek (right hip) is expected to return from the 10-day IL Monday.

Rays: Snell, out since July 22, may get a date to resume throwing Monday. ... Reliever José Alvarado (right oblique strain) worked a perfect inning for Class A Charlotte and may be back next weekend.

Rays: RHP Charlie Morton (12-3) will face Toronto RHP Jacob Waguespack (2-1) Monday night. In Morton's big league debut on June 14, 2008, he faced Hall of Famer Vladimir Guerrero, and he could get the chance to pitch against his son, Vladimir Jr. "That's kind of cool," Morton said. The senior Guerrero was 1 for 3 off Morton that day with a single to center.