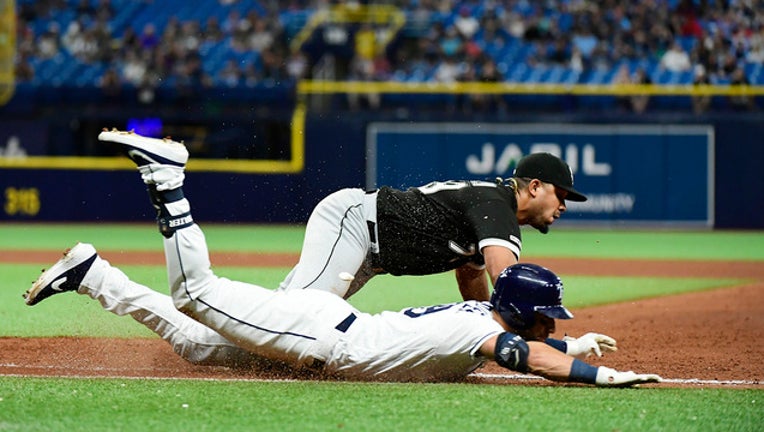 Jose Abreu of the Chicago White Sox gets beat to first base by Kevin Kiermaier of the Tampa Bay Rays. Kiermaier injured his left thumb on the slide in. (Photo by Julio Aguilar/Getty Images)

Kiermaier is hopeful of missing just a couple of weeks after an MRI on Sunday found the ligament intact and no surgery required.

"It's the best news I could have received given what happened," Kiermaier said. "I'm going to be OK. I'm going to be back out on the field sooner than later."

Kiermaier was hurt diving headfirst into first base on an infield single in the eighth inning of the Rays' 2-1, 11-inning loss to the Chicago White Sox on Saturday night.

"I was just trying to make something happen right there," he said. "Yes, I regret sliding into first base. I didn't think that was going to happen, but that's what happens when you do things on the fly and don't have a thought process."

Tampa Bay manager Kevin Cash said Kiermaier will be evaluated after getting three days of treatment to "see if it makes a turn for him for the better."

The Rays lost for the 21st time in 36 games and have fallen behind Cleveland and Oakland in the AL wild-card race.

"Right now we have a struggling team and things haven't been going our way a whole lot lately," Kiermaier said. "This is when I want to play harder, I want to play with more passion."

Heredia and Avisail Garcia, who started in center field Saturday for the first time in a big league game since 2013, will fill in for Kiermaier.

This is the fourth consecutive year the standout defender has been sidelined by sliding or diving injuries.

Kiermaier missed 57 games last season because of a torn right thumb ligament that occurred while sliding into second base.

He missed 61 games during the 2017 season after fracturing his right hip sliding awkwardly into first base on an infield hit attempt.

Kiermaier fractured his left hand diving for a ball in 2016 and missed 48 games.

"Quirky injury, he's had a couple of them unfortunately," Cash said. "I always appreciate the effort. I don't think you can ever tell a guy not to slide or not to dive."

Also, there is no date for when All-Star second baseman Brandon Lowe, out since July 3 with a right shin bone bruise, will be back.

"Doesn't look like he's quite where he needs to be mobility-wise," Cash said. "Little things probably irritate it and still hurt it, which is a little head scratching. Still looking for him to take another positive step in the right direction."

Infielder Matt Duffy will be reinstated from the 60-day IL during a three-game series with Boston that begins Monday night. He has not played in the majors this season because of a left hamstring injury.