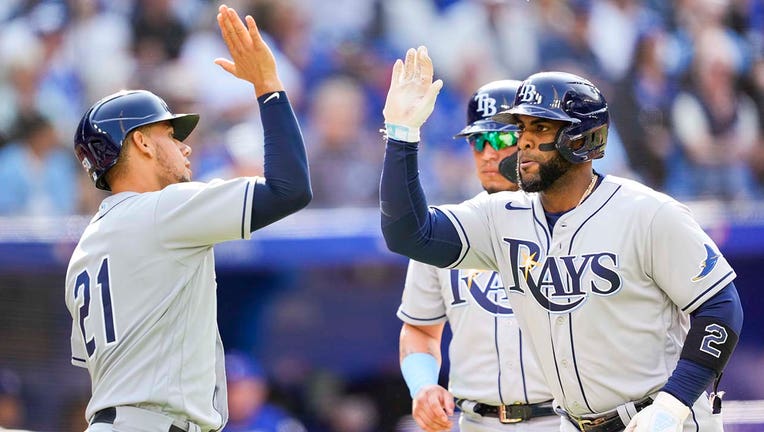 TORONTO, ON - SEPTEMBER 15: Yandy Diaz #2 of the Tampa Bay Rays celebrate this home run with Rene Pinto #50 against the Toronto Blue Jays in the second inning during their MLB game at the Rogers Centre on September 15, 2022 in Toronto, Ontario, Canad

TORONTO - Yandy Díaz hit a three-run home run and the Tampa Bay Rays — starting an unprecedented nine Latin American position players on Roberto Clemente Day — routed Toronto 11-0 on Thursday to pull within a half-game of the Blue Jays in the wild-card chase.

Activated off the injured list after missing 15 games because of a left shoulder impingement, Shane McClanahan (12-5) pitched five shutout innings. He allowed three hits, struck out five and walked one.

Isaac Paredes hit a solo home run and added an RBI single as the Rays (80-63) won the fifth and final game of the series. Toronto (81-63) will play a four-game series at Tampa Bay, starting next Thursday.

Seattle (80-62), which holds one of the three AL wild-card spots, was idle Thursday, but moved percentage points ahead of Toronto.

Díaz homered in a four-run second inning, his ninth. Paredes made it 5-0 with a leadoff blast in the seventh, his 19th

CLEVELAND (AP) — Elvis Andrus hit one of Chicago’s five home runs off rookie Hunter Gaddis — and backed up a pregame swipe at the Guardians —to help cut Cleveland’s lead in the AL Central to three games.

Andrus connected in the fifth inning off Gaddis (0-2) — the first Cleveland pitcher to allow five homers in a game since Luis Tiant in 1969.

On Wednesday, Andrus raised some eyebrows by telling reporters he expected the first-place Guardians "to crumble, the closer we get."

Gavin Sheets hit a two-run homer in the second to start Chicago’s homer spree against Gaddis, and Andrew Vaughn, Yoán Moncada and Yasmani Grandal joined Andrus by hitting shots off the right-hander.

Lance Lynn (7-5) limited the Guardians to two run and six hits in 6 1/3 innings. The right-hander is 5-0 in his last seven starts. Cleveland had its winning streak stopped at six.