TAMPA, Fla. - Right now, the Tampa Bay area is home to two of the number-one teams in the nation. In baseball, it's Jesuit, and now the Sickles softball team just earned top billing.

The Gryphons staked their claim to the title after an undefeated 6-0 start.

"I was like, 'No way! No way!'" laughed Herron. "It was very exciting and I'm proud of us because last year was kind of a rebuilding year since we lost so many seniors. This year is really rewarding to have everyone come out and work together as a team."

"I was happy for the girls that they're getting the respect, the attention they deserve," said Sickles head coach Al Bowman. "They've worked very hard in the offseason and the beginning of the season." 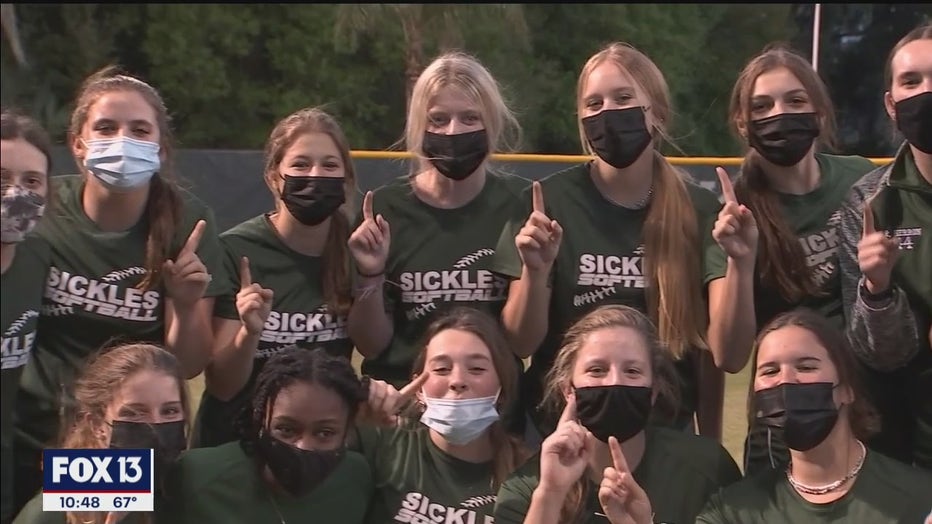 Herron has pitched the Gryphons to a perfect start, with four of their six wins allowing just one run.

"This year we have like really good team chemistry," said Herron. "I like love all the girls. They all love each other. We don't have clicks, no drama, nothing. We're just a really good group of girls."

DaNia Brooks, the daughter of Derrick Brooks, is Sickles' duel threat, at 2-0 on the mound and one of the leading hitters.

"I love to be competitive," said Brooks. "Especially with a team, who you know has your back and will always be there picking you up when you're down. That's what I love about this sport."

While the Gryphons appreciate the recognition of the numer-one ranking. Their number one goal is to be number one in Class 6A at the end of the year. That would give the school just their second state title and the first in 20 years.

"That would be just such a good thing for our team and bring us even closer together going into the next year," said Brooks. "Keep that going."

With a majority of the schedule still left to play, Sickles is just enjoying their rise to fame.