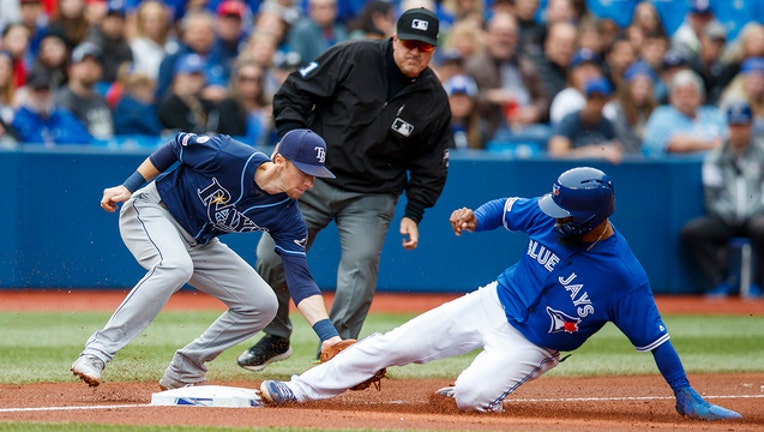 TORONTO - Blake Snell lost in a tuneup for a potential postseason outing, and the Tampa Bay Rays were beaten by the Toronto Blue Jays 8-3 Sunday in their last game before the wild card playoff against the Oakland Athletics.

Tampa Bay finished 96-66, one win shy of the franchise record set the 2008 pennant-winning team that lost to Philadelphia in the World Series. The Rays headed to Oakland for Wednesday's matchup against the A's (97-65), when Charlie Morton (16-6) will start. The winner of that game starts the Division Series at AL West champion Houston on Friday.

Making his third appearance returning from elbow surgery, Snell (6-8) allowed two runs and three hits in 2 1/3 innings. Snell threw 37 of 62 pitches for strikes, up from 26 pitches in his first outing and 52 in his second.

Teoscar Hernández homered for the third straight game, extending his career-best total to 26, as the Blue Jays won for the ninth time in their final 13 games.

In likely his final game with Toronto, Justin Smoak went 2 for 4 with two doubles and three RBIs. Eligible for free agency, Smoak left to a standing ovation when he was replaced by pinch-runner Billy McKinney in the seventh.

Clay Buchholz (2-5) allowed one run and four hits in five innings to win for the first time since Aug. 31 against Houston.

Back in the lineup after missing the previous two games because of a sore left foot, Rays first baseman Ji-Man Choi doubled in the first and hit his 19th homer in the fourth. Choi left Wednesday's win over the Yankees after fouling a pitch off his right foot. Jesús Aguilar replaced Choi in the fourth.

NO QUIT IN KK

Two-time Gold Glove winner Kevin Kiermaier made an outstanding diving catch in center to retire Richard Ureña in the second.

Rays: INF Yandy Díaz (left foot) was activated off the 60-day IL and RHP Cole Sulser was designated for assignment. Díaz started as the designated hitter and led off, going 0 for 3 before being replaced by a pinch hitter. Díaz lined out in both the first and third innings, hitting the ball at more than 100 miles per hour each time. ... INF Eric Sogard, sidelined since Sept. 15 because of a sore right foot and ankle, said he's optimistic he'll be available Wednesday.