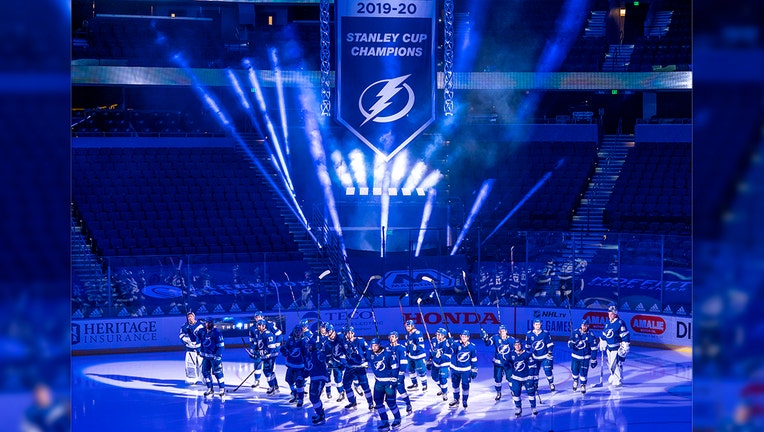 TAMPA, FL - JANUARY 13: raising the Stanley Cup Champions Banner during the NHL Hockey match between the Lightning and Blackhawks on January 13, 2021 at Amalie Arena in Tampa, FL. (Photo by Andrew Bershaw/Icon Sportswire via Getty Images)

TAMPA, Fla. - Steven Stamkos had a goal and two assists in his return to the Tampa Bay Lightning lineup, and the defending Stanley Cup champions opened the season with 5-1 victory against the Chicago Blackhawks on Wednesday night.

The Lightning captain, who played just one game in the playoffs, has points in 17 consecutive games — including 14 goals.

Tampa Bay raced out to a 3-0 lead in the opening period on Palat’s rebound goal on the power play, Joseph’s redirect that bounced in off Subban, and Cirelli’s deflection of Erik Cernak's shot.

Stamkos made it 4-0 with a power play goal in the second and Point one-timed Stamkos' pass from the slot in the third.

Strome broke the shutout bid with a power-play goal that bounced in off the skate of Vasilevskiy with 3:24 remaining.

Chicago played without captain Jonathan Toews, who is out indefinitely with an undisclosed illness.

Tampa Bay unveiled its 2019-20 Stanley Cup championship banner in a pregame ceremony, but will wait to raise it to the rafters until fans can be in attendance.

Rookie defenseman Cal Foote, the son of former Colorado Avalanche defenseman Adam Foote, made his NHL debut for the Lightning. He took the customary solo lap before pregame warmup. Foote had one hit in 10:47 during the game.

Blackhawks: At Tampa Bay on Friday.