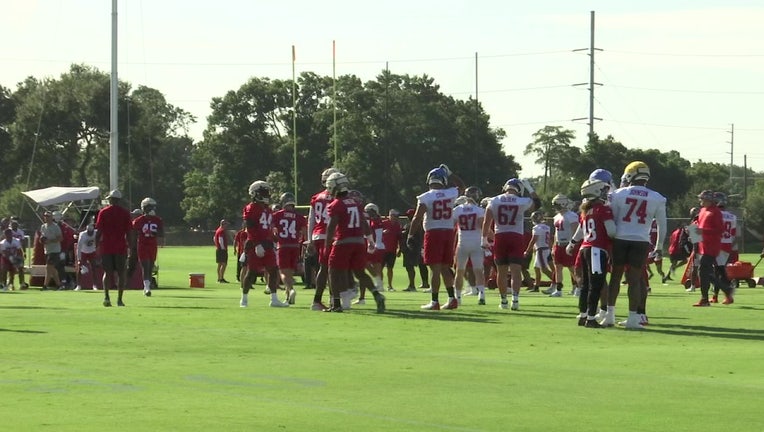 TAMPA, Fla. - Day one of training camp is officially in the books for the Tampa Bay Buccaneers, and it's the first for Todd Bowles as head coach.

"It's different because I've been here for three years," said Bowles. "I didn't have to build a staff and get acclimated to the building or anything else like that. It really feels like it hasn't changed for me."

"What better opportunity for me, at this point in my career, to come down here and not only play with the greatest quarterback of all time but play a part of this culture," Rudolph said.

It was also day one for Julio Jones as a Buccaneer, even though he didn't play because the ink was still drying on his one-year contract as camp was ending.

"I'm looking forward. I'm not looking backwards," said Jones. "It's a great opportunity for me to be a part of something special."

Both Rudolph and Jones are entering their 12th year in the NFL and decided on Tampa Bay for one big reason.

"Everything is about winning," Rudolph said. "The only thing I haven't done to this point is win a championship, and that's all I want to do. It's been very evident the first two days here that that is the ultimate goal."

With more than 18,000 career receiving yards between Jones and Rudolph, the Bucs are hoping to recapture some of that magic that made those two some of the game’s greats over the last decade.

"These two guys are good football players in their own right," said Bowles. "Whether it's on the field or in the red zone."

Jones will now look to join the rest of the Bucs receivers when camp resumes Thursday morning.