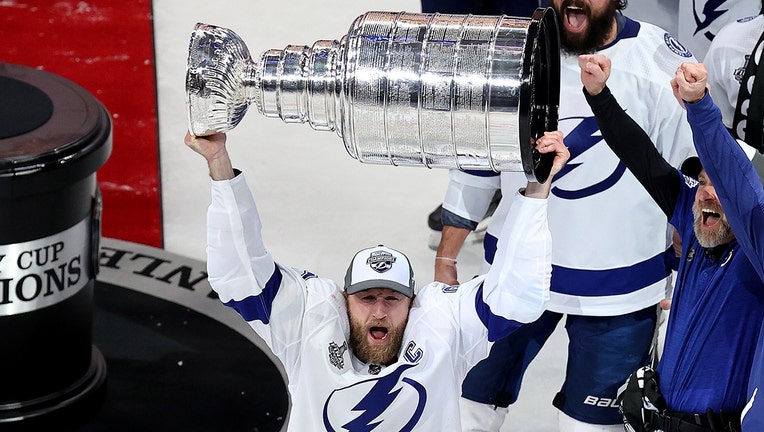 Steven Stamkos skates with the Stanley Cup following the series-winning victory over the Dallas Stars in Game Six of the 2020 NHL Stanley Cup Final at Rogers Place on September 28, 2020 in Edmonton, Alberta, Canada. (Bruce Bennett/Getty Images)

TAMPA, Fla. - The Stanley Cup champion Tampa Bay Lightning will host the Chicago Blackhawks in one of five games to open the NHL’s coronavirus pandemic-shortened 2021 season on Jan. 13.

The league released a first-of-its kind schedule Wednesday featuring four realigned divisions based on geography and limited to division play only. Each team will play 56 regular-season games, which will be squeezed into what’s tentatively scheduled as a 116-day stretch ending on May 8.

It includes an NHL first: An all-Canadian North Division made up the nation’s seven teams will play each other nine or 10 times. The three remaining eight-team divisions have all U.S. teams, which will face each division foe eight times.

Though the playoffs are set to open May 11, that date could be pushed back in the event the league is required to reschedule games amid the pandemic.

Though the schedule is set, much remains undetermined, including game times. A much bigger question is whether the NHL receives approval from Canada’s provincial and federal health officials to allow the nation’s teams to play in their home cities.

The full schedule can be found below with the date and opponent: