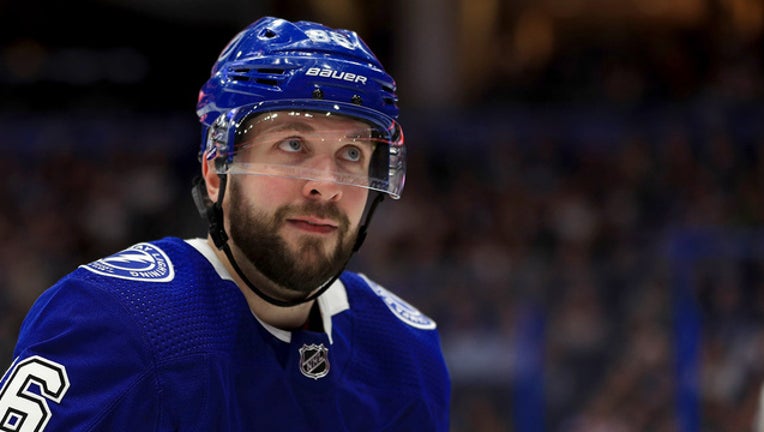 Nikita Kucherov of the Tampa Bay Lightning reacts to missing a goal during a game against the Los Angeles Kings at Amalie Arena on February 25, 2019 in Tampa, Florida. (Photo by Mike Ehrmann/Getty Images)

TAMPA, Fla. - Leading playoff scorer Nikita Kucherov is expected to miss the entire regular season because of a hip injury that requires surgery, a blow to the Tampa Bay Lightning that also comes with a silver lining for the defending Stanley Cup champions.

Kucherov won’t be available for the 56-game NHL season that’s scheduled to run from Jan. 13-May 8. General manager Julien BriseBois is optimistic the 27-year-old will be back for the playoffs and said Kucherov’s absence will allow the Lightning the long-term salary relief to be salary-cap compliant with the rest of their key players under contract.

"Those are the cards that we’ve been dealt," BriseBois said on a video call Wednesday. "It’s our job as a group — players, coaches, management — to get ourselves into the playoffs so that we give Kuch an opportunity to compete this year and help us defend this Stanley Cup championship as we’re chasing another one."

Kucherov had a postseason-best 27 assists and 34 points despite playing through a groin injury. BriseBois said Kucherov reported discomfort in early December, tried a rehab regimen with a cortisone shot and only decided to have surgery next week after none of that alleviated his pain.

"No one loves playing hockey more than Nikita Kucherov," BriseBois said. "I know how much it pains him that he will be missing the regular season. I also know how hard he’s going to work to get back as soon as possible."

Before helping the Lightning win the Cup last season in the bubble, Kucherov won the Hart Trophy as NHL MVP in 2018-19, leading the league with 128 points.

Being able to put Kucherov and his $9.5 million cap hit on long-term injured reserve will allow Tampa Bay to re-sign its final key restricted free agent, center Anthony Cirelli. BriseBois said Tampa Bay had the framework of a contract in place with Cirelli, and agent Pat Morris said the sides are working on it.

The Lightning are making the most of the bad injury news by getting other signings done this week. On Tuesday, they re-signed Erik Cernak to an $8.85 million, three-year deal and brought back fellow defenseman Jan Rutta for $2.6 million over two years. On Wednesday, they re-signed forward Mathieu Joseph for $1.475 million over two years and Alex Volkov for $700,000 this season.

"I will still be exploring opportunities to unload some salary and create a little more flexibility for us," BriseBois said. "But at least as of now I know that worst case we can go into the season, we’re going to be cap compliant, we’ve been able to sign everyone we wanted to have signed and we’re going to be able to ice a really competitive hockey team this year and chase another championship."

Without Kucherov’s injury, Tampa Bay likely would have needed to trade a key player to get under the $81.5 million salary cap that’s flat in light of the pandemic. The team put veteran forward Tyler Johnson on waivers in October to clear his $5 million off the books, but he went unclaimed by the league’s other 30 teams.

BriseBois said Johnson understood the situation and was professional during conversations after last season. The Lightning tried to work out a trade with a team interested in acquiring Johnson, but the financial picture didn’t work out.

"If Tyler Johnson is on my team to start the year, I think that’s a good thing because Tyler Johnson’s a good player," BriseBois said. "He’s going to help us win hockey games, and ultimately that’s what I want to do."

That’s more difficult without Kucherov and is more urgent with fewer games during the regular season. Just four out of eight teams in the temporarily realigned Central Division will make the playoffs.

"Every year, we have good teams that miss the playoffs," BriseBois said. "It’s not going to be easy. It wasn’t going to be easy even with Kuch in the lineup, and now it’s more of a challenge."