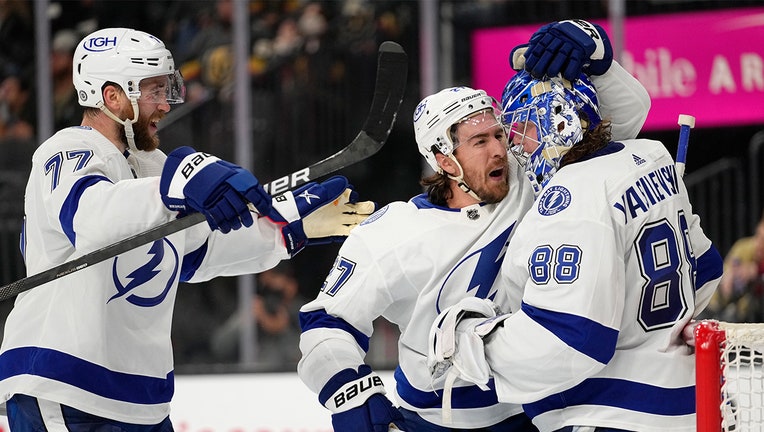 TAMPA, Fla. - Steven Stamkos scored the tie-breaking goal on a third-period power play and the Tampa Bay Lightning rallied past the Vegas Golden Knights 4-3 on Tuesday night in the final NHL game before an extended holiday break.

Gabriel Fortier, Pierre-Edouard Bellemare and Anthony Cirelli also scored for the Lightning, who played without coach Jon Cooper and trailed 3-1 late in the second. Andrei Vasilevskiy made 36 saves as the Lightning won their third straight and ended Vegas’ five-game winning streak.

It was the only NHL game played Tuesday night after nine others were postponed because of coronavirus concerns. The league will begin its annual Christmas break Wednesday, two days earlier than originally planned, due to a startling rise in COVID-19 cases that shut down 10 of the 32 teams.

Games are scheduled to resume Monday.

The Golden Knights were missing defenseman Alex Pietrangelo and forward Evgenii Dadonov, who both entered the COVID-19 protocol earlier in the day.

Tampa Bay was without Cooper, who entered the protocol roughly two hours before warmups. Lightning assistant Derek Lalonde filled in for Cooper.

Lalonde said Cooper texted the staff around 4:30 p.m. that he had entered the protocol.

"We got to the rink, nothing really changed, obviously let the guys know and things would be seamless," Lalonde said. "Just kind of went about our business. I don’t think anything is surprising."

Demand for COVID-19 tests is rising just as the holidays approach and the omicron variant becomes the dominant strain in the US, infecting people who were already vaccinated or even got boosted.

Lalonde said Stamkos handed him the game puck afterward and said, "Not how you envisioned your first win."

"It was probably coming at any moment with what’s been going on around the league," Stamkos said of Cooper’s announcement. "Vegas got hit today. We got hit with our coach. I think you have to expect some more here in the next coming days just with how it’s gone around the league."

With the Flyers and Capitals called off earlier in the day, Tampa Bay and Vegas didn’t disappoint in the spotlight.

The score was tied midway through the third when the Lightning were able to work the puck around the perimeter before Stamkos fired a one-timer past Brossoit, capping three unanswered goals for the two-time defending Stanley Cup champions.

Stamkos set a franchise record for most game-winning goals (65).

Tampa Bay enters the break with the most points in the NHL (44).

"It’s disappointing not to win," Vegas coach Peter DeBoer said. "I thought we put a lot of effort and work into that game. We did some really good things for long stretches. You’d like to get rewarded with points for that, but there’s a reason they have the record they have."

Fortier, a second-round draft pick of the Lightning in 2018, got his first career point in his eighth NHL game when the Golden Knights failed to clear the zone. Mikhail Sergachev outworked Michael Amadio for the puck in the Vegas zone and fed Fortier, who skated into the circle and beat Brossoit short side to put Tampa Bay ahead 1-0 in the first period.

"I’ll remember this moment for the rest of my life," Fortier said.

RELATED: NFL updates protocols in response to increase in COVID-19 cases around league

Stone tied it a little more than three minutes later when Max Pacioretty’s feed deflected off his skate for a power-play goal.

Stone got his second goal of the night thanks to linemate Chandler Stephenson, who set things up by stealing the puck at one end and finishing with a nifty assist at the other. After showing extreme patience by holding the puck before entering Tampa Bay’s zone, and feeding Stephenson at the blue line, Stone took a backhand feed and one-timed a chip shot past Vasilevskiy to make it 2-1.

Roy turned in the dangle of the night when he entered the zone on his own — a risky 1-on-3 disadvantage — and used an inside slip to split 2018 Norris Trophy winner Victor Hedman and Zach Bogosian before beating Vasilevsky over his glove.

But it didn’t take long for the Lightning to strike back, as they needed only 43 seconds late in the second to get back-to-back goals.

First, it was former Golden Knight Bellemare with a one-timer after Corey Perry threaded a perfect pass from behind the net. It was Bellemare’s 50th career goal, and fifth against Vegas, his most against any opponent. Less than a minute later it was Cirelli gathering a loose puck, skating to Brossoit’s left, and backhanding home the equalizer.

NOTES: Vegas starting goalie Robin Lehner and defenseman Nic Hague were out due to injuries. Both are day-to-day. ... After playing 7:47 and scoring his two goals, Stone didn’t return for the second or third period.

Tampa Bay: Hosts Montreal in its first game back from the holiday break on Tuesday.

Vegas: Returns from the break to host Colorado on Monday.