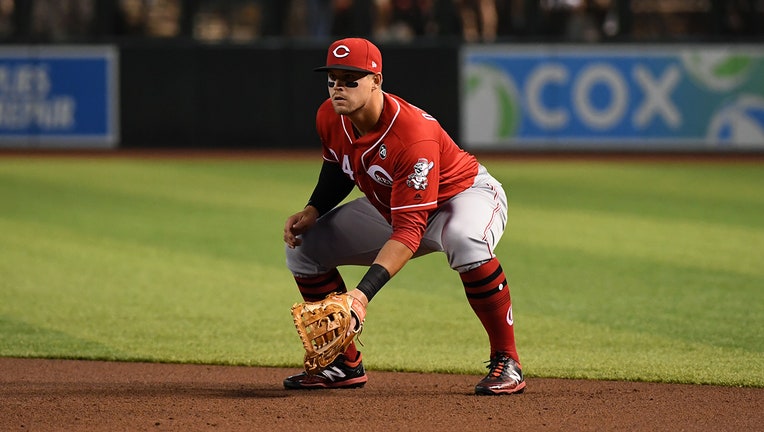 Brian O'Grady of the Cincinnati Reds gets ready to make a play at first base against the Arizona Diamondbacks at Chase Field on September 15, 2019 in Phoenix, Arizona. (Photo by Norm Hall/Getty Images)

ST. PETERSBURG, Fla. - The Tampa Bay Rays have acquired minor leaguer Brian O'Grady from the Cincinnati Reds for a player to be named and cash.

To make room for the first baseman/outfielder on the 40-man roster, the Rays designated first baseman Jesus Aguilar for assignment on Wednesday.

The 27-year-old O'Grady spent most of last season with Triple-A Louisville, where he hit .280 with 28 home runs, 77 RBIs and 20 stolen bases. He also made his major league debut, hitting .190 with two homers and three RBIs in 28 games over three stints with the Reds.

Aguilar, who would have been eligible for arbitration, appeared in 37 games and batted .261 with four homers and 16 RBIs with the Rays after being acquired from the Milwaukee Brewers at last season's trade deadline. He has a .256 average with 63 homers and 215 RBIs over six seasons with Cleveland, Milwaukee and Tampa Bay.