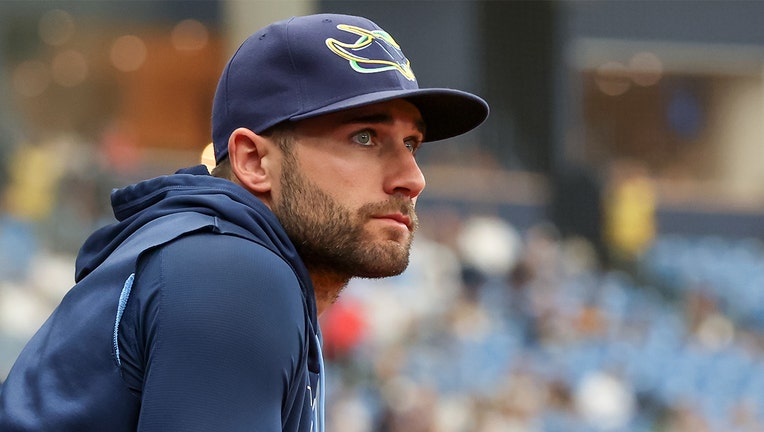 Kevin Kiermaier #39 of the Tampa Bay Rays looks on from the bench as his team takes on the Tampa Bay Rays during a baseball game at Tropicana Field on September 25, 2022 in St. Petersburg, Florida. It is Kiermaiers last home game for the Rays. (Photo

ST. PETERSBURG, Fla. - Kevin Kiermaier is a familiar face when it comes to the Tampa Bay Rays, and after spending 12 years with the team, he is now a free agent.

The longtime center fielder had a $13 million club option that the Rays declined, making him a free agent. Kiermaier’s buyout is $2.5 million, according to the MLB. Kiermaier join catcher Mike Zunino in free agency, but Zunino could be a likely return to the team.

The decision was expected. The team could re-sign him at a lower salary, but after the video tribute they did for "KK" during the second-to-last home game, it's not likely. The video ended with, "Thank you, KK."

At the time, fans stood and cheered while Kiermaier stepped out of the Rays dugout and waved to the crowd of over 20,000. The Rays is the only MLB organization he has ever known.

Following Thursday's announcement, he shared a message on Twitter:

Scott and Chris breakdown NFL week 1 shockers. Catch up with "Fitzmagic" himself, former Buc Ryan Fitzpatrick. Also joined by Rays outfielder Kevin Kiermaier to discuss his rehab and future with the team. Plus, the debut of ‘Ballad Breakdown’ featuring a Red Hot Chili Peppers classic.

Kiermaier was born in Indiana, where he played high school baseball. He enrolled in Parkland College, where he competed in the National Junior College Athletic Association.

This past season, Kiermaier was limited to 63 games this year. He last played on July 9 in Cincinnati and had season-ending surgery on his left hip in August.

Now, after the team declined the 2023 club option – completing a $53.5 million, six-year contract – the New York Yankees could be his landing spot.

In August, another fan-favorite left the team: Brett Phillips. The Rays announced they designated him for assignment to make room on the roster.