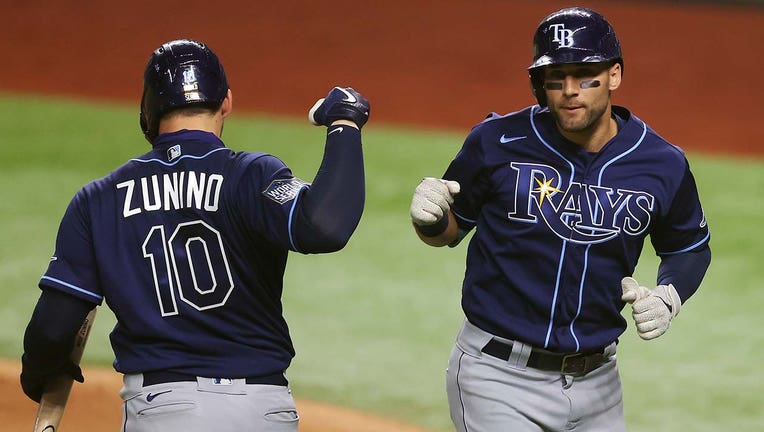 ARLINGTON, TEXAS - OCTOBER 20: Kevin Kiermaier #39 of the Tampa Bay Rays is congratulated by Mike Zunino #10 after hitting a solo home run against the Los Angeles Dodgers during the fifth inning in Game One of the 2020 MLB World Series at Globe Life

ST. PETERSBURG, Fla. - Tampa Bay Rays standouts Kevin Kiermaier and Mike Zunino are out for the season because of injuries, another significant blow for the defending AL East champions.

Manager Kevin Cash said before Monday night’s game at Baltimore that Kiermaier is having an operation in the coming weeks. The 32-year-old outfielder hasn’t played since July 9 because of a left hip injury, and Kiermaier said earlier this month that he might miss the rest of the regular season.

Zunino, a 31-year-old catcher, hasn’t played since June 9 because of left shoulder problems. He’s out for the season because of thoracic outlet syndrome surgery, according to a team spokesman.

Kiermaier, a three-time Gold Glove winner, has hit .228 with seven home runs, 22 RBIs and six steals this year. Cash indicated that his operation would be to fix the labrum.

"He’s been playing with it, and the doctor basically said years ago that you play through it until you can’t," Cash said. "Well, we got to the point where he couldn’t."

Kiermaier is on the 60-day IL and wasn’t eligible to return until September. Zunino was eligible to come back next month.

Zunino was an All-Star last year, when he hit a career-high 33 home runs. He’s hit .148 with five homers in 36 games this season.