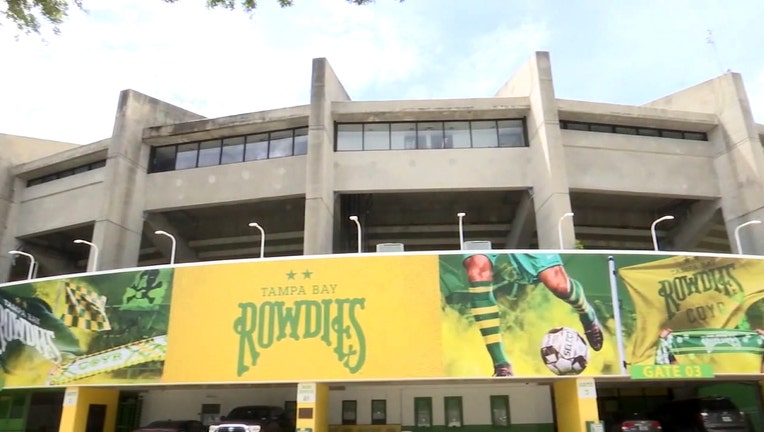 ST. PETERSBURG, Fla. - The Tampa Bay Rowdies are hoping to keep up the Champa Bay tradition this weekend.

The St. Petersburg-based team is hosting the United Soccer League National Championship Final on Sunday night at Al Lang Stadium. The game starts at 8:30 p.m. Now, they head to the final for the second straight year. The championship game was canceled last year after a number of COVID-19 cases in the team.

"To have to tell the team over a Zoom call that we weren't going to be playing in the final was the most difficult phone call I've ever had to make as part of this club," explained Lee Cohen, president of the club, "but it was a moment that helped us build towards 2021. The guys really rallied around that. Most of them came back. They really made it their mission to get us back to this point.

"That mission," he added, "was evident on Saturday night."

It was a sellout crowd at Al Lang that night as the Rowdies clinched the Eastern Conference title. It was a thrilling comeback.

At one point, Louisville City was winning, 0-2, but the Rowdies scored two goals in the final 12 minutes. Lucky Mkosana scored both of them. Then, the game went into extra time.

That's when Steevan Dos Santos, a Rowdies forward who was previously out with an injury, scored the third goal.

"It was unbelievable," he described to FOX 13. "I think, until the end, we had to keep going, keep pushing it."

Dos Santos said the crowd of green and gold made themselves known from the beginning to end.

"If you see the fans, they're always with us. Even with the last game, 83 minutes and we're down to zero – and they kept going and going," he recalled. "I think that was one of the reasons that we believed until the end because the fans are like, ‘We are here for you guys and just keep going.’"

But after that game-tying goal, Rowdies fans roared.

"It was crazy. It was unbelievable," Dos Santos said. "Even some tears went down my face."

Cohen said he has never experienced a game like that, even after a decade with the team.

"This team is so special but it's just because they are more than a team. It's like we're a family. We've been through two years of a lot," he said. "We're not done. We're not finished. Now we're going to get that opportunity."