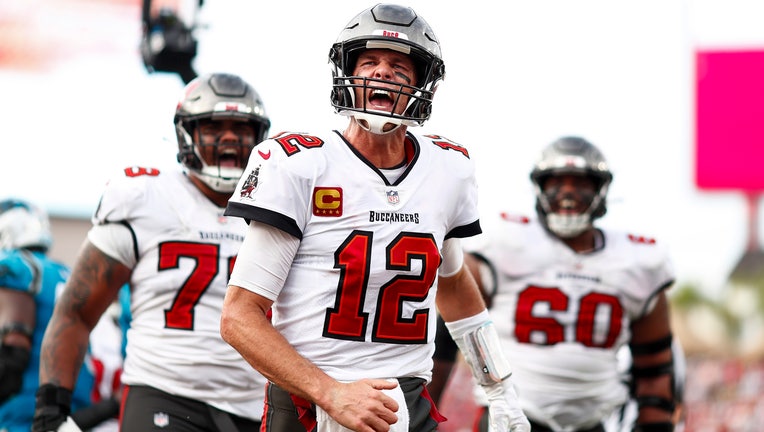 TAMPA, FL - JANUARY 1: Tom Brady #12 of the Tampa Bay Buccaneers screams in celebration after rushing for a touchdown during the fourth quarter of an NFL football game against the Carolina Panthers at Raymond James Stadium on January 1, 2023 in Tampa

Evans finished with 10 catches for 207 yards, scoring on receptions of 63, 57, and 30 yards and becoming the first player in NFL history to begin a career with nine consecutive seasons with 1,000-plus yards receiving.

It was all Bucs from there, with Evans beating cornerback C.J. Henderson for touchdowns twice and Darnold losing a fumble on a sack inside his own 10. That turnover set up Brady’s 1-yard TD sneak, which put the game out of reach with 1:58 left.

The Bucs (8-8) can finish the regular season with a winning record by beating Atlanta on the road next weekend. As division champs, they are assured of beginning the playoffs with a home game in two weeks.

The Panthers, who had won four of six to climb back into playoff contention after firing coach Matt Rhule and trading star running back Christian McCaffrey, could have clinched their first NFC South title since 2015 by beating the Bucs and then winning at New Orleans.

Darnold threw for 341 yards, three touchdowns and one interception. He also lost two fumbles while falling to 3-2 since becoming Carolina’s starter on Thanksgiving weekend.

A week after rushing for 320 yards and three touchdowns in a 37-23 victory over Detroit, the Panthers rode Darnold’s arm to their early 14-0 lead and were in complete control until Brady found Evans racing up the right sideline for 63-yard catch-and-run to get the Bucs going.

Two plays later, Darnold mishandled a snap in shotgun formation and compounded the mistake by whiffing when he tried to pick up the ball, leaving linebacker Devin White to recover the fumble at the Carolina 13.

Ryan Succop’s 22-yard field goal trimmed Tampa Bay’s deficit to 14-10 just before halftime, but the Bucs wasted an opportunity to pull closer — or possibly take the lead — when a 90-yard drive stalled inside the Panthers 10 and Succop had a 26-yard field-goal attempt blocked.

Darnold completed 23 of 37 passes with TDs of 17 yards to Tommy Tremble, 24 yards to D.J. Moore and 19 yards to Shi Smith, the last putting Carolina up 21-10. The Panthers, meanwhile, rushed for just 74 yards on 22 attempts as D'Onta Foreman was limited to 35 yards on 13 carries.

Retired coach Bruce Arians, who helped recruit Brady before leading Tampa Bay to its second Super Bowl championship two years ago, was inducted into the Bucs’ Ring of Honor during a halftime ceremony.

Buccaneers: CB Carlton Davis (shoulder) and LB Carl Nassib (pectoral) were inactive. Rookie RB Rachaad White left the game in the third quarter with what appeared to be a hand injury. He returned in the fourth quarter.

Buccaneers: At Atlanta next weekend.