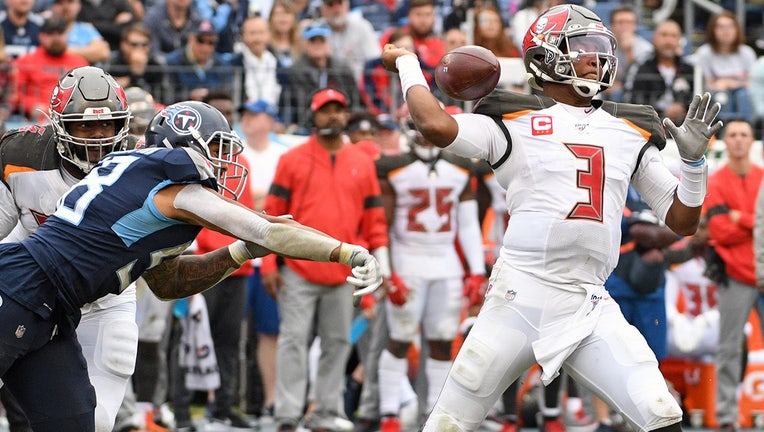 NASHVILLE, Tenn. - A shotgun snap off Jameis Winston's face mask, Breshad Perriman running into a teammate just after a handoff 4 yards from a touchdown and passes overthrown to the Tennessee Titans.

Yes, the Tampa Bay Buccaneers had a lot of issues coming off their bye.

The Bucs wound up losing their third straight and fourth in five Sunday, 27-23 to the Tennessee Titans, and wide receiver Mike Evans thinks they can look at themselves for this latest loss.

"Obviously, if you watch the game, we're better than them," Evans said. "We gave them the game. We can't do that in the NFL."

The Bucs (2-6) outgained the Titans 389-246 in total offense, and Winston threw for 301 yards while scrambling eight times for 53 more. He threw two touchdown passes to Evans, who finished with 11 catches for 198 yards. But the Titans doubled up their coverage of Evans in the fourth quarter, keeping Winston from throwing to him down the stretch.

The NFL's fourth-highest scoring offense, which had been averaging 28.8 points a game, did not score again after Winston's second TD pass to Evans, a 2-yarder, with 11:11 left in the third quarter. That kept the Bucs from overcoming a combined four turnovers -- two interceptions and a pair of fumbles all by Winston.

Two turnovers came in the first quarter, one where a shotgun snap hit Winston. Arians defended his quarterback, saying that wasn't his fault. Center Ryan Jensen took the blame for that.

"It was a great snap," Winston said. "I mean it hit me right in my face. But I just wasn't looking, and it caught me off guard."

Winston also overthrew Chris Godwin in the first quarter, a ball easily intercepted by Malcolm Butler to set up the Titans' second TD and a 14-3 lead.

"We're always communicating things," Winston said of Godwin. So he just thought what he thought and in that case it wasn't the right thing. But Chris is going to be fine."

The other two turnovers came inside the final 6:03, the last with 18 seconds left. The four turnovers give Winston an NFL-worst 90 giveaways since being the No. 1 pick overall in 2015, and this was his sixth game with at least four turnovers. Arians made very clear the issue on the interceptions Sunday didn't rest with Winston.

"It's the receivers, not the quarterback," Arians said. "The receivers totally screwed it up."

Winston took the blame also for Perriman essentially tackling Ogunbowale on third-and-4 at the Titans 4 for a 2-yard loss late in the second quarter. Perriman went in motion, running from the right side and into Ogunbowale right after the handoff.

"It's a timing snap," Winston said. "We worked on it in practice. That was the first time that we've done it with him in the game. That one's on me. I've just got to get better timing."

The defense held Tennessee to just 70 yards offense in the first half and finished with three sacks with Jason Pierre-Paul back for his first game of the season.

The Bucs couldn't protect a 23-17 lead as the Titans (4-4) scored the final 10 points with their best drives of the game. The Bucs thought they had an interception twice on Tennessee's first scoring drive by Carlton Davis III only to have each overturned by defensive pass interference penalties.

Arians lost his challenge of the second penalty.

"I challenged because it got flopped (by tight end Anthony Firkser), but I guess New York still thought it was a push," Arians said.

The Bucs coach said his young secondary, which came in part of a defense ranked last in the NFL against the pass, needs to get their heads out of their rears. Arians said the Bucs could have held the Titans to a pair of field goals in the first quarter by playing the right technique.

Asked about Arians' comment, Davis said he gets paid to play and not go back and forth talking.

"Obviously we have to go back to the drawing board," Davis said. "We didn't get the job done here today."

Arians had a simple response when asked what the Bucs can do moving forward.