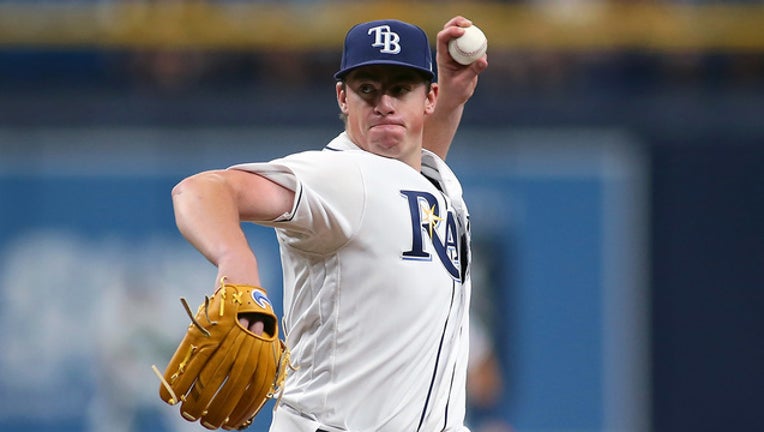 Brendan McKay of the Rays delivers a pitch to the plate during a game between the Texas Rangers and the Tampa Bay Rays on June 29, 2019, at Tropicana Field in St. Petersburg, FL. (Photo by Cliff Welch/Icon Sportswire via Getty Images)

ST. PETERSBURG, Fla. (FOX 13) - Brendan McKay’s road to the big leagues has been a short trip. It’s taken just two years after being selected fourth overall in the MLB Draft. It's an impressive accomplishment, but what McKay is facing now as the only active Major League two-way player will be a greater challenge.

“There’s always going to be doubters or people that say it’s hard to be done or it can’t be done,” said McKay. “If you don’t have success, people are going to knock on you for that.”

Two-time all-star Charlie Morton says he couldn’t imagine trying to pull this off.

“You only have so many reps you can take” said Morton. “Your body can only take so much. You really can only work on pitching and hitting so much before you wear down.”

“It’s just something you don’t see every day. It would just be like a football player playing both ways in college and in the NFL. You never see that,” explained Rays outfielder Kevin Kiermaier.

There have only been a handful of players in the history of Major League Baseball that attempted to be a two-way player. You have to go all the way back to Babe Ruth’s days -- 100 years ago -- to find anyone that has had success.

McKay is one of only four players in a century that started his MLB career as a pitcher and non-pitcher in his first two games.

The Rays have another two-way player in the minors and McKay’s success could lead to a new trend with baseball’s next generation.

“Hopefully the success that I’ll have will spark guys. Hey, if I’m doing this in high school, try to do it in college. If I’m doing it well in college, try to have a ball club let me do it. And keep doing it successfully until you have to make a choice on one or the other,” added McKay.