TAMPA, Fla. - University of South Florida head football coach Jeff Scott returns to campus for the first time in 12 weeks with a smile behind his mask. Scott is optimistic that he'll be coaching his first game for the Bulls come September.

Getting to that point starts outside under a newly constructed tent. Players lift weights with masks in limited groups of 10. The workouts started at 6:30 with a final group wrapping up at 2:30.

Right now, Coach Scott is taking a day-to-day approach not knowing what adversity he'll have to face next in his first year as a head coach. He has concerns about what would happen if one of his players tests positive.

"If one of your quarterback were to test positive for COVID and he's been sitting in a room with the other four quarterbacks,” said Scott, "do all of the quarterbacks have to quarantine for 14 days? It may be a little harder to go to practice and play a game without a quarterback." 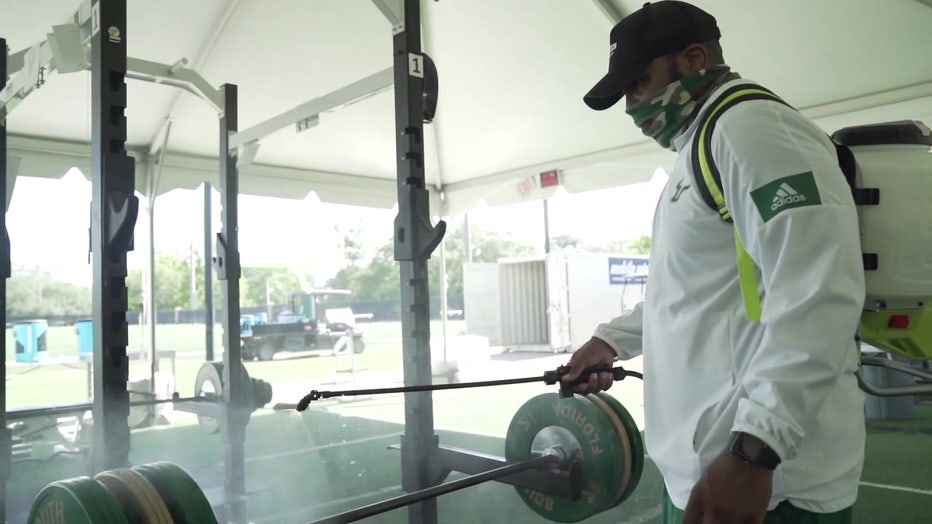 One positive that Jeff Scott has taken from this three months of quarantine is that he's had time to learn a lot about who his players are off the field. Each week, he does Zoom call with four or five players to find out about their background. He's gotten through 75 players on the team.

Recently he's been most impressed with the community outreach from K.J. Sails and Jordan McCloud.

"Both Jordan and K.J. are right here from Tampa,” said Scott. "This is a very important place to them. For a majority of our team to show up Saturday was very powerful."

Scott expects their ‘phase two’ of strength and conditioning to last for three weeks. If there are no setbacks with COVID-19, he expects his full coaching staff will be allowed to join the players for full workouts in July.

The NCAA committee is recommending football teams be allowed six weeks for a preseason game with games starting in late August.