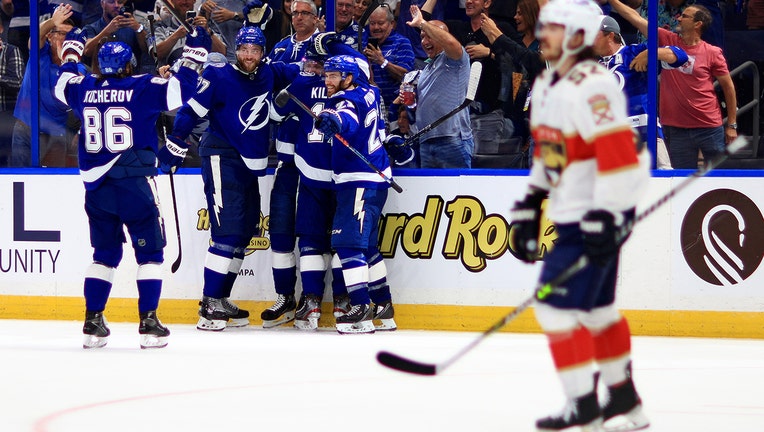 TAMPA, FLORIDA - MAY 26: Steven Stamkos celebrates a goal in the second period during Game Six of the First Round of the 2021 Stanley Cup Playoffs against the Florida Panthers at Amalie Arena. (Photo: Mike Ehrmann/Getty Images)

TAMPA, Fla. - Andrei Vasilevskiy wrapped up a series with a Game 6 shutout for the second straight time, stopping 29 shots in the Tampa Bay Lightning's 4-0 victory over the Florida Panthers on Wednesday night.

The Panthers have not won a playoff series since the 1996 Eastern Conference Finals.

Steven Stamkos scored his third goal of the series and Pat Maroon added his first. Brayden Point added his fourth of the series in the third period and Alex Killorn had an empty-net goal with 1:42 left.

Rookie Spencer Knight, back in net for Florida after his strong playoff debut in Game 5, finished with 20 saves.

The Lightning grabbed the early lead when Tyler Johnson raced past Anton Stralman to negate an icing call, picked up the puck behind the net to feed a backhand pass in front. After the puck initially bounced, Maroon was able to get a whack at in the air to backhand it past Knight at 6:16 of the first period.

The Lightning had to kill off two power-play chances in the second period to protect the one-goal lead before Florida’s Sam Bennett took an undisciplined penalty at 12:53. Bennett, who took a costly penalty in Game 1 that led to the tying goal that resulted in a suspension for Game 2, put Lightning defenseman David Savard in a headlock and then ripped his helmet off. The roughing penalty led to Tampa Bay’s second power-play chance of the game and second goal.

In a familiar-looking play, Nikita Kucherov fed the puck up high to Victor Hedman who one-touched a pass over to Stamkos at the left circle for a one-timer at 13:27 of the second period.

Point put it away at 14:36 of the third, dancing around MacKenzie Weegar down low and drawing Knight to the ice before tucking the puck around the goaltender's left pad.

Tampa Bay forward Barclay Goodrow returned to the lineup for his first game of the playoffs. Goodrow, acquired at the trade deadline in 2020 and a key part of Tampa Bay’s third line last season en route to a Stanley Cup championship, suffered an undisclosed upper-body injury May 8 against Florida.

Florida defenseman Keith Yandle, who owns the second-longest consecutive games played streak in NHL regular-season history at 922, sat out for the third time in the past four games. Yandle had also appeared in 57 consecutive playoff games before being a healthy scratch for Game 3. He has dressed for the three home games in the series.

Tampa Bay D Victor Hedman and RW Nikita Kucherov both finished the series with eight assists to tie the franchise playoff record for most assists in a postseason series. The mark was originally set by Kucherov against the New York Islanders in the 2020 Eastern Conference Finals.

Seven of Hedman’s assists came on the power play. Only two players have recorded more power-play assists in a single series since the stat was tracked starting in 1933-34: Paul Coffey with Detroit in 1993 and Mario Lemieux with Pittsburgh in 1992.