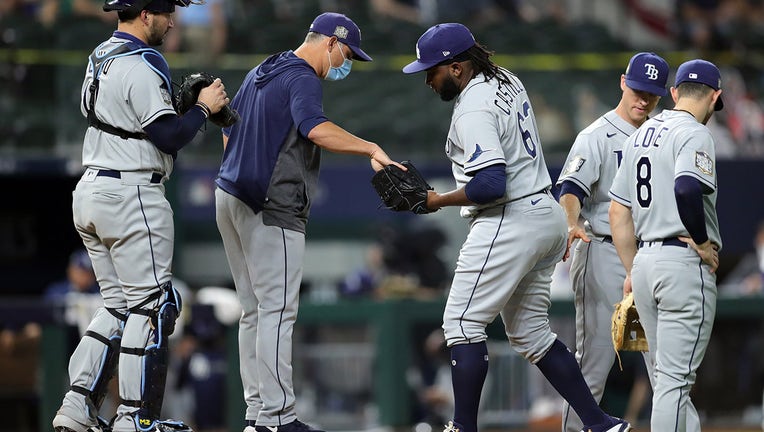 Diego Castillo of the Tampa Bay Rays takes the ball from manager Kevin Cash in the ninth inning of Game 2 of the 2020 World Series between the Los Angeles Dodgers and the Tampa Bay Rays at Globe Life Field on Wednesday, October 21, 2020 in Arlington,

Tampa Bay's vaunted bullpen took over after ace Blake Snell faded, and the Rays beat the Los Angeles Dodgers 6-4 in Game 2 of the World Series on Wednesday night.

Anderson and Fairbanks each allowed a solo homer while also getting some big outs. Loup and Castillo retired the final four Los Angeles hitters, with Castillo getting his third postseason save.

"It's fairly consistent to how we've gone about it in the postseason," manager Kevin Cash said. "I really like when we have the opportunity to get Nick in the game and calm the situation down. He's pretty good at doing that."

The group Cash described as "a whole damn stable of guys who throw 98 miles per hour" helped carry the Rays to their first World Series win since 2008. But the relief corps haven't been quite so dominant in this Fall Classic.

But it was enough, with Castillo ending the game by striking out the only batter he faced, Chris Taylor, who checked his swing and was called out by first base umpire Chris Guccione.

"Cash puts them in good spots for them to succeed and they show up," Snell said of the Rays relievers. "The biggest key for our bullpen and how good they are is he makes the right calls to put them in situations that he knows they can succeed in."

Lowe homers twice, Rays hold off Dodgers 6-4 to even Series

Snell became the only other pitcher besides Hall of Famer Sandy Koufax to strike out at least eight without allowing a hit in the first four innings of a World Series game. The lefty faded after allowing Taylor's two-run homer in the fifth and was gone two batters later.

Like Snell, all four relievers behind him made their World Series debuts.

Anderson struck out Justin Turner with two on in a 5-2 game in the fifth. Will Smith homered with one out in the sixth before Anderson retired Cody Bellinger on a groundout and pinch-hitter Edwin Rios on a swinging strikeout.

"He's been as good as any reliever in baseball from the day that we acquired him," Cash said of Anderson, acquired at last year's trading deadline from Miami. "When the game's on the line and he's available, we're going to go to him."

Fairbanks, pitching across the street from the ballpark where he made his major league debut with the Texas Rangers last year, replaced Anderson and pitched a perfect seventh.

The hard-throwing right-hander acquired in a trade last summer surrendered Corey Seager's seventh homer of this postseason leading off the eighth, cutting the lead to 6-4.

Rays fans bringing the noise in Texas despite being outnumbered

"Just to come to a World Series game and watch our team play? Again, It's a once-in-a-lifetime opportunity," one fan said. "We're so happy to be here."

Turner followed with a double. Max Muncy then flied out and after a mound visit, Smith smashed a liner to third base that was snared by Wendle for the second out. That's when Loup came on.

The lefty Loup got the first two outs of the ninth -- the second on a flyout just shy of the warning track in left by Austin Barnes.

The finish was more like the low-cost bullpen that dominated all year for the small-market Rays.

Twelve different pitchers converted at least one save during the regular season, matching the major league record despite the compressed schedule, and the group had a 3.37 ERA, third in the majors.