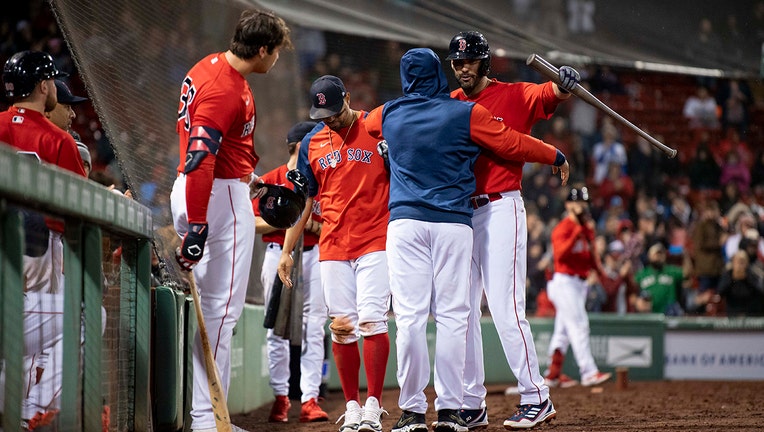 BOSTON, MA - OCTOBER 5: J.D. Martinez #28 of the Boston Red Sox reacts with teammates as he exits the game during the eighth inning of a game against the Tampa Bay Rays on October 5, 2022 at Fenway Park in Boston, Massachusetts. (Photo by Billie Weis

BOSTON - The playoff-bound Tampa Bay Rays lost their fifth straight game to finish the regular season, giving up a pair of home runs to J.D. Martinez in a 6-3 loss to last-place Boston on Wednesday.

Xander Bogaerts also had a pair of hits in what could be his final game for the Red Sox. The 30-year-old shortstop, who like Martinez is eligible to become a free agent this offseason,

Despite losing seven of their last eight games, the Rays went 86-76 to finish third in the AL East and will open the best-of-three wild-card round in Cleveland on Friday. Tampa Bay won 100 games last year for its second straight AL East title.

Ji-Man Choi had three hits, including a two-run homer in the third, for Tampa Bay. Vidal Bruján cut the Red Sox lead to 4-3 in the seventh with a solo shot that right fielder Alex

Eduard Bazardo earned the win in his first career decision, allowing one hit and one walk in a scoreless fifth after starter Nick Pivetta threw 103 pitches in four innings. Josh Fleming (2-5) gave up both Martinez homers, allowing four runs on eighth hits while striking out four.

Christian Arroyo also had two hits for the Red Sox, singling in a run in the two-run eighth to make it 6-3. Matt Barnes pitched the ninth for his eighth save.

The Hall of Famer had announced that he will be retiring after this season. The video mixed highlights from his 24-year playing career and calls from his time in the NESN TV booth.

"I’m lucky to have had the career I’ve had, and I’m lucky to have been a part of this," Eckersley said in the pregame show. "Four championships. Got some rings -- I didn’t have anything to do with it. But to be around this, to be a part of it, man, we’re lucky."

Eckersley, who turned 68 on Monday, was drafted by Cleveland as a California high schooler in 1972 and pitched 24 seasons – winning 20 games as a starter for Boston in 1978 and saving 51 games for Oakland in 1992, when he was the AL MVP and Cy Young winner.

Rays: Placed LHP Colin Poche on the 15-day IL with a right oblique strain and recalled Fleming from the taxi squad.