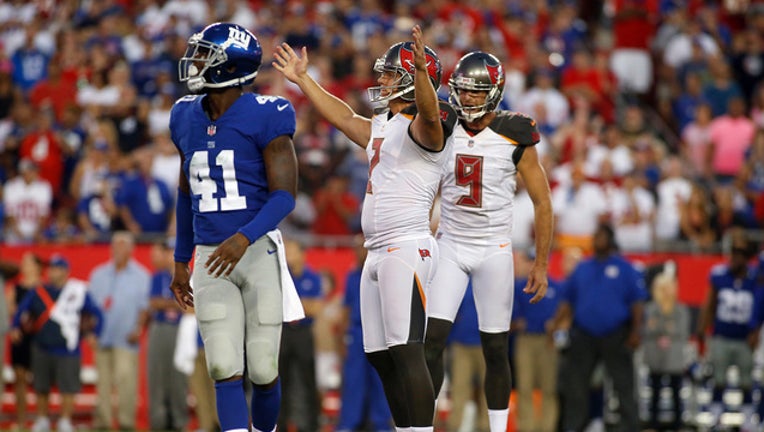 Nick Folk of the Tampa Bay Buccaneers celebrates as he and punter Bryan Anger watch the path of Folk's 34-yard field goal to give the Buccaneers the 25-23 win during the final seconds at Raymond James Stadium. (Photo by Brian Blanco/Getty Images)

When the third-year pro protects the ball as well or better than the opposing quarterback, the Bucs usually win.

Case in point was Sunday against the New York Giants when Winston threw for 332 yards and three touchdowns without a turnover and brought his team from behind twice in the fourth quarter to beat Eli Manning 25-23.

"When Jameis plays like that, we'll be hard to beat," coach Dirk Koetter said. "He did a nice job."

One week after throwing three interceptions in a lopsided loss at Minnesota, Winston was at his best with the game on the line - 5 for 5 for 55 yards on the drive setting up Nick Folk's 34-yard field goal as time expired.

Folk redeemed himself after missing two field goals and an extra point to help the Giants (0-4) get back in the game after falling behind 13-0.

With the clock running down and the Bucs trailing 23-22, Winston took a knee twice to position the ball in the center of the field for the winning kick.

"After he missed that second one, I went to him and told him: 'You're going to win this game for us,'" Winston said.

The Giants lost on a last-second field goal for the second straight week . They took a one-point lead on Rhett Ellison's 2-yard TD reception with 3:16 remaining.

Manning threw to Odell Beckham Jr., in the rear of the end zone for a 2-point conversion that was disallowed because the receiver stepped out of bounds before making the catch.

"A tough one there that came down to the end again," Giants coach Ben McAdoo said. "We've got a lot of fight in us, but so do a lot of teams in this league. We have to minimize the mistakes and maximize the details to give us a chance to win these games."

Some things to know about the Bucs-Giants:

SLIM HOPES: At 0-4, the Giants are off to their worst start since losing six straight in 2013. Making the playoffs will be difficult, however star receiver Odell Beckham, Jr., isn't giving up on the idea. "I would've never thought we would go 0-4, but it is what it is. ... We can't sit here and cry about it," Beckham said. "You just have to keep trying to get better each and every day, get the first win and see what happens from there."

SPREADING THE BALL: Winston threw TD passes to Mike Evans, O.J. Howard and Cameron Brate. Adam Humphries led the Bucs with six receptions for 70 yards, and Winston set up the winning field goal with a 26-yard throw to Brate on third-and-1 from the Giants 39.

RARE LOSS: Manning entered 5-0 against the Bucs, including a road playoff victory that began the 2007 Giants' Super Bowl run. He gave New York a chance Sunday by throwing for 288 yards and two touchdowns without a turnover. He also scored the Giants' first rushing TD of the season on a 14-yard scramble. Manning conceded it's surprising to be 0-4 after going 11-5 a year ago. "We still have a good team, doing some good things, just not quite making enough plays to win the game," Manning said. "And in this league, you've got to earn it. You've got to earn every win."