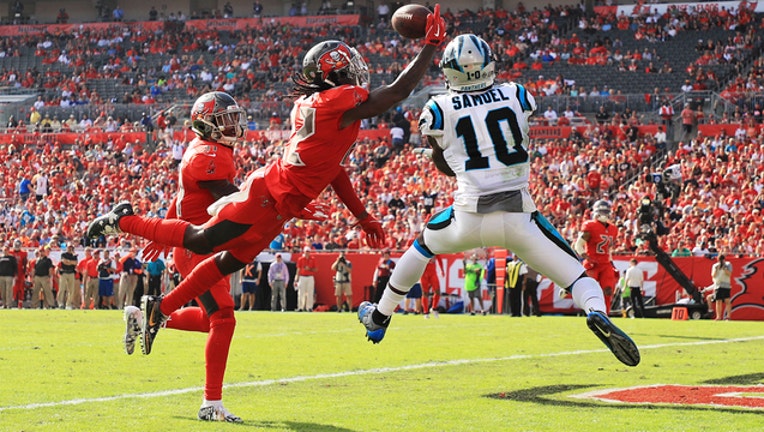 De'Vante Harris #22 of the Tampa Bay Buccaneers breaks up a pass intended for Curtis Samuel #10 of the Carolina Panthers during the second quarter at Raymond James Stadium on December 02, 2018 in Tampa, Florida. (Photo by Mike Ehrmann/Getty Images)

TAMPA, Fla. (AP) - The Tampa Bay Buccaneers got after Cam Newton all game long, sacking the Carolina star four times and intercepting four of his passes.

"The 'D' was fantastic," coach Dirk Koetter said after Sunday's 24-17 victory over the reeling Panthers.

Truth is, though, the Bucs go as Jameis Winston does.

The fourth-year pro delivered another strong performance in his second start since regaining the starting quarterback job, outplaying Newton and fueling hope for a season-ending turnaround.

Winston threw for 249 yards and two touchdowns without a turnover, Andrew Adams had three of the defense's takeaways, and Tampa Bay (5-7) suddenly has its first winning streak since starting the year 2-0.

"Jameis is a fantastic player, and sometimes that gets negated by turnovers," Koetter added. "You could see the last two weeks when we don't turn the ball over we're a lot harder to beat."

Winston completed 20 of 30 passes, following up on a turnover-free outing during the previous week's 27-9 victory over the San Francisco 49ers. He also led the Bucs in rushing with 48 yards on five attempts.

"I thought Jameis hurt us big time with his mobility, tucking the ball and running a couple times and converting some early first downs for them. That kept us off-balance," Panthers coach Ron Rivera said. "A couple times he got outside. And when he did, he was able to find the receivers open."

Meanwhile, Adams led a spirited defensive effort against Newton, who came into the game feeling he's been playing the best football of his career this season, even though the Panthers (6-6) have lost four straight after a 6-2 start.

"I take this one personally. I just have to play better, that's what it comes down to," Newton said.

"As a signal-caller, as a quarterback, it's hard to point blame when you've got to account for yourself in the mirror," Newton added. "And when I look back at this game, it really comes down to myself protecting the football. ... You can't just keep throwing the ball up for grabs. I'm a better player than that, and I know that."

Winston threw TD passes of 3 yards to Adam Humphries and 13 yards to Chris Godwin in the first half, moving the No. 1 overall pick from the 2015 draft ahead of Josh Freeman as Tampa Bay's career touchdown pass leader with 81.

Newton completed 28 of 41 passes for 300 yards and two touchdowns, an 8-yarder to Christian McCaffrey in the first half and a 10-yarder to Devin Funchess that finished a 92-yard drive and trimmed a 14-point deficit to 24-17 late in the third period.

Tampa Bay couldn't put anything together offensively to put the game away after that, and Carolina's chances of getting closer were thwarted by two fourth-quarter interceptions.

"We gave ourselves a chance at the end of the game, but you've got to make some plays earlier so it doesn't come down to that," Panthers linebacker Luke Kuechly said. "We did some good things, but obviously we didn't do enough."

A week after setting a Carolina franchise record with 237 total yards from scrimmage during a 30-27 home loss to Seattle, McCaffrey rushed for 106 yards on 10 carries and had nine receptions for 55 yards.

Godwin, starting in place of the injured DeSean Jackson, finished with five catches for 101 yards.

Newton has thrown at least two TD passes in 11 straight games, extending his franchise record. In addition to being sacked four times, the Bucs hit him as he delivered the ball on his past two interceptions.

Rivera said the quarterback was "a little sore" by the end of the day.

"We'll see what the doctor has to say," the coach said. "For the most part we've been able to get through it, but he got really sore at the end of this game."

The Bucs went seven consecutive games without forcing a turnover before creating six takeaways - all interceptions - the past two games.

That's after only having one interception in the first 10 games of the season.

The first two picks Sunday led to a field goal and Winston's TD pass to Godwin.

Panthers: TE Greg Olsen limped off after re-injuring his right foot in the second quarter and did not return. ... G Trai Turner also left in the first half with a neck injury.

It's Olsen's third injury to the same foot. He missed nine games last season with a broken foot, had surgery and returned to play. He re-broke it this year, did not have surgery and came back quickly.

"Today, my foot just kind of had enough, kind of ruptured on me," Olsen said. "I've been able to manage it since I came back (from surgery). But today it popped pretty good on me."

Buccaneers: Played without three starters, Jackson (thumb), CB Brent Grimes (knee) and T Demar Dotson (knee/hamstring). ... S Justin Evans (toe) left in second quarter and did not return. ... S Isaiah Johnson was evaluated during the second half for a concussion and did not return.

Panthers: at Cleveland, their fourth road game in five weeks.