WESLEY CHAPEL, Fla. - Wiregrass Ranch quarterback Rocco Becht has come of age; a rising senior who now has the size to match his toughness.

"I think I gained about 20 to 25 pounds," said Rocco. "It's probably the biggest weight gain I've had since I've been playing football."

"He's worked," said Rocco's father and former Bucs tight end Anthony Becht. "He stuck his nose in, during the pandemic, in the weight room. Got himself bigger and stronger."

Rocco is a Division I talent who just added national champion to his resume. Becht led Team Tampa to a 7x7 title, earning the tournament's MVP.

"It was awesome," said Rocco. "There were about 40 teams there with a bunch of great quarterbacks and great players. I definitely had some receivers out there that I feel could have gotten that MVP award." 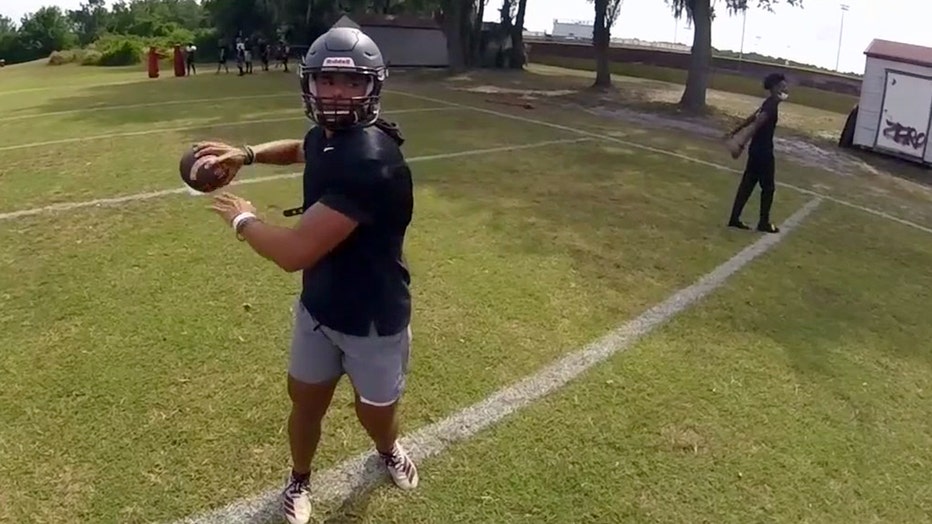 Despite all the elevated attention on Rocco, he's going into his senior year settled on his future in college. He has over a dozen Division I offers but is locked into and verbally committed to the Iowa State Cyclones.

"I love Iowa State," said Rocco. "Since I was a sophomore when they offered me, they really just showed me the relationship and how much they love me, my film and how much and can fit into their offense."

This could be a special senior year for the Wiregrass quarterback. He has a four-star target to toss to in Bryson Rodgers, a junior whom he'd like to eventually see join him at Iowa State.

"In my eyes, he's the best 2022 quarterback," said Rodgers. "The film doesn't lie. His pocket presence is just different, accuracy, everything he does is precise."

Rocco would like to play in the NFL like his dad, who is already proud of his son's achievements

"We are proud of him absolutely," added Anthony. "It's a dream come true."