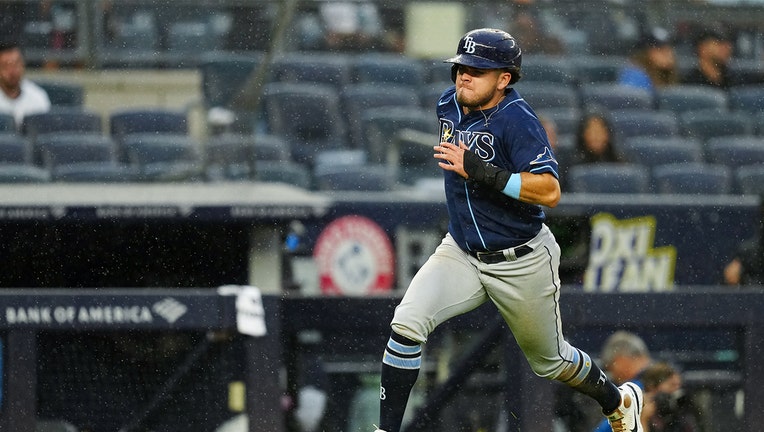 NEW YORK, NY - SEPTEMBER 11: Jonathan Aranda #62 of the Tampa Bay Rays runs for home in the ninth inning during the game between the Tampa Bay Rays and the New York Yankees at Yankee Stadium on Sunday, September 11, 2022 in New York, New York. (Photo

An AL East lead that stretched to 15 1/2 games in early July was down to 3 1/2 after Friday, increasing heart rates and blood pressures of a frazzled fanbase.

With Aaron Judge and Giancarlo Stanton hitting 1-2 atop the batting order for the first time all season, New York romped to consecutive blowouts of the Tampa Bay Rays that restored the lead to 5 1/2 games with 3 1/2 weeks remaining.

"It just feels like a little bit more relaxed because we don’t have all the pressure," Torres said after homering twice and driving in four runs — in the first two innings — of Sunday’s 10-4 rout.

Stanton homered for the second straight day and Oswaldo Cabrera hit the first of his big league career during a seven-run, second-inning barrage that boosted the lead to 10-1. The Yankees outscored the second-place Rays by a combined 20-7 over the final two games.

"They hit a glitch at a part of season," Rays manager Kevin Cash said. "I feel like we’ve played them well here as of late, obviously, not the last two days."

Before Sunday, New York had started an unchanged batting order only on Aug. 12-13 at Boston. Judge, considered the MVP front-runner, had been walked seven times in four games before the new configuration.

"Two wrecking balls to start it off," Yankees manager Aaron Boone said Saturday, "I want them up, and I want to try and get Judge in the best position to have a little bit of protection but have our guys behind him knowing he’s going to be on base with our best chance to score."

Judge had a bases-loaded sacrifice fly and went 1 for 4, leaving him with major league bests of 55 homers and 121 RBIs along with a .307 batting average,

Stanton’s homers this weekend were his first since July 15 and raised his total to 26.

Josh Donaldson returned from paternity leave Saturday, Jose Trevino is due back Tuesday, Harrison Bader started a rehab assignment Sunday, and Anthony Rizzo and DJ LeMahieu hope to be over their injuries later this month.

"To get a couple more guys back in the mix and back in the lineup obviously is huge," Boone said, "and hopefully as we go, that continues to happen."

With the Yankees wearing NYPD and FDNY caps on the anniversary of the 9/11 terrorist attacks, the game started after a 1-hour, 47-minute rain delay. Ten of New York’s first 14 batters reached, with Torres hitting a three-run homer in the first and a solo drive in the second, both off Luis Patiño (1-2).

Stanton had an opposite-field, three-run homer to right in the second. Torres connected to cap a 10-pitch at-bat for his 21st homer this year and 12th career multihomer game. The Yankees have 15 sets of back-to-back homers this season, their most since 1957.

Cabrera, playing his 23rd big league game, greeted Calvin Faucher with a two-run homer to deep right. He’s giving the ball to the family of his brother’s wife.

Domingo Germán started on three days’ rest as New York juggled because of Wednesday’s rainout and was pulled after one inning and 14 pitches. Wandy Peralta (3-4), the third of eight pitchers, allowed one hit over 2 1/3 innings.

After winning the season series against the Rays 11-8, the Yankees (85-56) have 21 games remaining: six against Boston, four vs. Texas, three each against Milwaukee, Toronto and Baltimore, and two against Pittsburgh — only the Blue Jays, Orioles and Brewers have winning records.

Tampa Bay (78-60) has 24 games left: nine against Toronto, six against AL-best Houston plus three each against the Rangers, Boston and Cleveland.

"I try not to get caught up in it," Boone said. "By definition it feels better, but we got, whatever, 20 or so to go, and we’ve to get ourselves right and whole and play our best."

Germán received cheers when he ran to the bullpen to warmup while holding high an American flag in his right hand. He was inspired by watching Sammy Sosa running with a flag in the Chicago Cubs’ first home game following the attacks.

"It was a way to show support to the country, to the people, the victims, and today I felt like it was a good way to kind of replicate that and show that horrific event, you remember what happened, and that it’s close to your heart," Germán said through a translator. "

CF Jasson Domínguez homered from both sides of the plate Saturday night for Class A Hudson Valley at Wilmington.

Yankees: Bader, sidelined since June 26 by plantar fasciitis in his right foot, went 1 for 3 with an RBI single and stolen base as a DH for Double-A Somerset in his first game in the Yankees organization. LHP Aroldis Chapman (leg infection) struck out the side around a walk in the fourth, LHP Zack Britton (Tommy John surgery) struck out two in a 1-2-3 fifth and RHP Miguel Castro (strained right shoulder) pitched a perfect sixth. ... 2B DJ LeMahieu (inflamed right second toe) hopes to return during the homestand from Sept. 20-25.

Rays: Open a five-game series at Toronto on Monday.