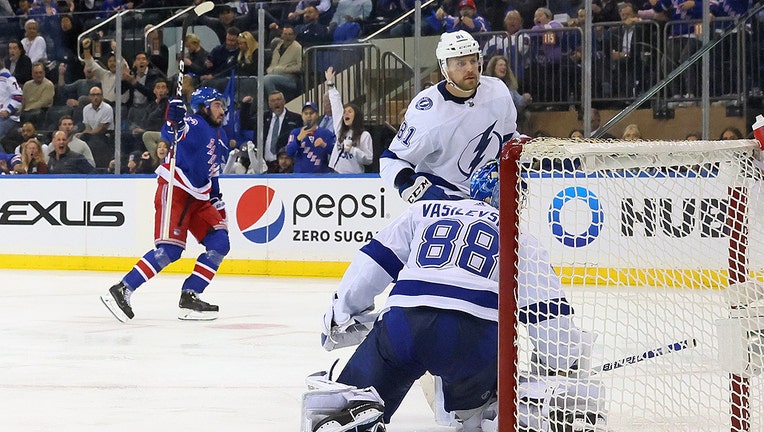 Mika Zibanejad #93 of the New York Rangers celebrates his third period goal against the Tampa Bay Lightning at Madison Square Garden during the season opening game on October 11, 2022 in New York City. The Rangers defeated the Lightning 3-1. (Photo b

NEW YORK - Mika Zibanejad scored twice, including a tiebreaking power-play goal in the third period, and the New York Rangers beat the Tampa Bay Lightning 3-1 in the season opener on Tuesday night.

Barclay Goodrow also scored and reigning Vezina Trophy winner Igor Shesterkin stopped 26 shots to help the Rangers start the new season with a win against the Lightning team that eliminated them from Eastern Conference final in June.

Steven Stamkos had a power-play goal for the Lightning and Andrei Vasilevskiy had 36 saves.

Zibanejad, who scored a short-handed goal early in the second period, gave the Rangers the 2-1 lead at 5:11 of the third with a slap shot from the left circle off a pass from Artemi Panarin, who recorded his 250th point with the Rangers.

Goodrow made it 3-1 as he deflected Ryan Lindren’s long shot from the left point past Vasilevskiy with 9 minutes remaining.