His one thing? Pedal power

TAMPA, Fla. - It’s one of the first decisions Josh Young makes each day: Drive his car or ride his bike to work? Most of the time he picks pedal power.

It all started with a social media post 12 years ago. Three words that read, "Just one thing."

“The idea was come up with one thing you can do that saves energy, allows for conservation and makes the world a better place,” Young explained.

That’s when he made the choice to park his car and exchange four wheels for two.

“This idea saves me a lot of money, allows me to lose weight and keeps me healthy,” Young said.

On average, Young rides his electric bike or pedal bike a little less than 100 miles per week. So far, he has cycled 65,000 miles while only logging 20,000 miles on his car.

But he does more than ride bikes; he also builds them. Each one is specially made for his safety and comfort.

He’s had a few close calls over the last decade, but has a few cycle secrets to keep him safe.

“I like to ride with traffic and far enough into the lane that I am always in front of, or behind a car and seldom beside one,” he said. “I think anytime you're beside a car, drivers aren't looking there and you're in danger.” 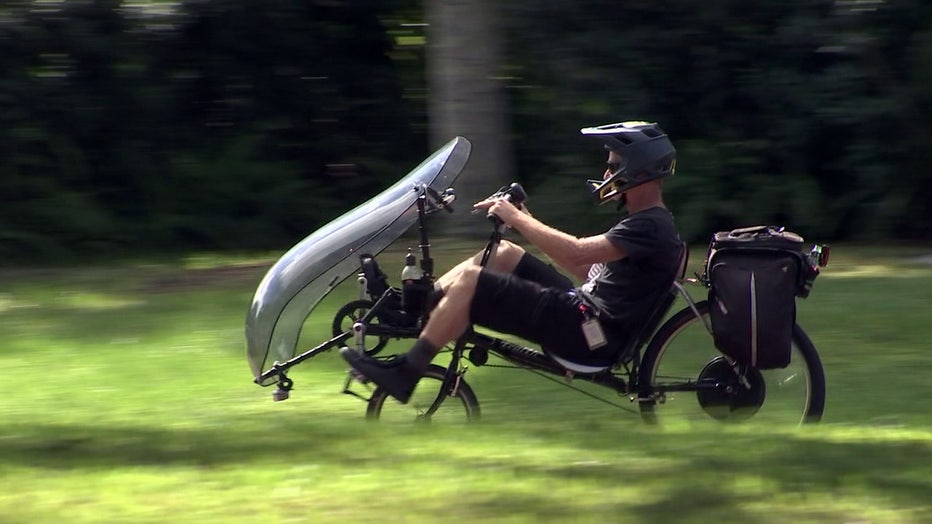 Motorists aren’t the only obstacles Young has to face during his 12-minute trek to his job at the Straz Center. He also pedals through the heat, the rain, and the bugs.

“A few years ago, I had a giant bug hit me at 30 mph. It was flying at me and it left a pretty big mark on my forehead," he recalled. "So I decided to add a windshield to protect me."

There’s no hurdle high enough to prevent Young from his mission of cycling for change.

“If all of us find one small change in our lives to make the world a better place and conserve what we've got for our children and our future, I think that's the best message you can take away from this,” he added.