Good Catch: Hogfish bite seems to be taking off, finally

Every Friday morning, Captain Dylan Hubbard of Hubbard's Marina joins Good Day to fill viewers in on his fishing forecast as we head into the weekend. Here is his fishing report for October 25, 2019.

The snook seem to not have realized it's getting cooler, yet, they are still pretty thick and active around our passes and local waters in the area. The flats’ passes and piers still have snook loaded up around the areas.

Plus, residential canals are starting to see them along with the mouths of the bayous and rivers. It’s a great time to go target some snook with live bait or artificials. Live bait for snook can be pinfish, pigfish, big shrimp, pass crabs, or even finger mullet. They seem hungry no matter what you’re throwing and what the tide is doing. It’s definitely the most prominent catch in our local area this past week.

You can find them best at night, but early morning hours and around dusk is working well, too. The only tough time to get them going is midday hours, when the sun is directly overhead. Behind last weekend’s storm, they were very active even when the winds were up and after the rain cleared Sunday and Monday.

Along with active snook, this past week the redfish are very active from upper Tampa Bay to Fort De Soto to the flats in the intercostal, too. They are scattered around a bit more now but seem to be very active at similar times to the snook.

Residential canals are holding the redfish under docks during the day and along the light lines of dock lights at night. We are seeing them around the mangrove islands in the bay and also on the oyster bars and flats. They love the smaller pinfish, shrimp or white bait. For artificial baits, soft plastic paddle tails, mirror lures, DOA shrimp or the old gold spoon are my favorite options.

Sheepshead are starting to show up around the area more and more. They love the bridges, docks, piers and other structure but once they get thick in the area you can find them in schools moving around the flats as well. They love barnacles, fiddler crabs, shrimp, cut oysters or clams for bait. You typically can’t target sheepshead with artificial lures, but I have seen them take them from time to time mostly the artificial shrimp when they are frenzy feeding around docks or bridges.
The cooler the local waters get, the better the sheepshead bite will become. Also, they seem to feed extra well behind the cold fronts when the water is stirred up and murky, and the barometer just fell out it’s like the dinner bell ringing for sheepshead.

Lots of mackerel around the beaches, piers, passes and especially around the Skyway. Mackerel love to eat the white bait and sometimes live shrimp too on the top half of the water column. However, I prefer to target them with a fast-moving gotcha plug in the 7/8th oz to 1oz size or a casting spoon with a 1-2oz casting lead as far 4-10ft in front of the spoon. 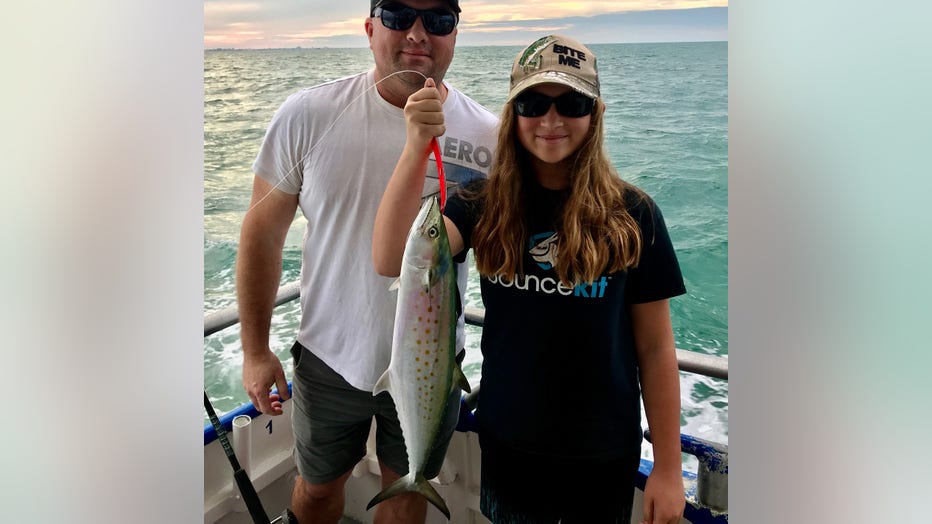 When the bite is hot, you can add some 30-pound wire in front of your lure or live bait but if you aren’t getting them chewing go with 20-pound floro to start. Often, when using live whitebait for them, you can use that 20-pound floro effectively if you use an extra-long shank J hook. Mustad makes some good ones in this style, but they are a little difficult to find sometimes.

Trout bite is good and shows signs of improving with the cooling temps. Trout are mainly loving the flats right now, but you can find them at night around the dock lights in the canals, in many of the passes on the bridge lights and rocky shorelines hanging in the street light’s glow chasing any live whitebait or shrimp around.
My favorite trout lure is a DOA shrimp hands down but some of the mirror lures are great options or the soft plastics too. However, live shrimp or green backs make great live baits for the trout too. 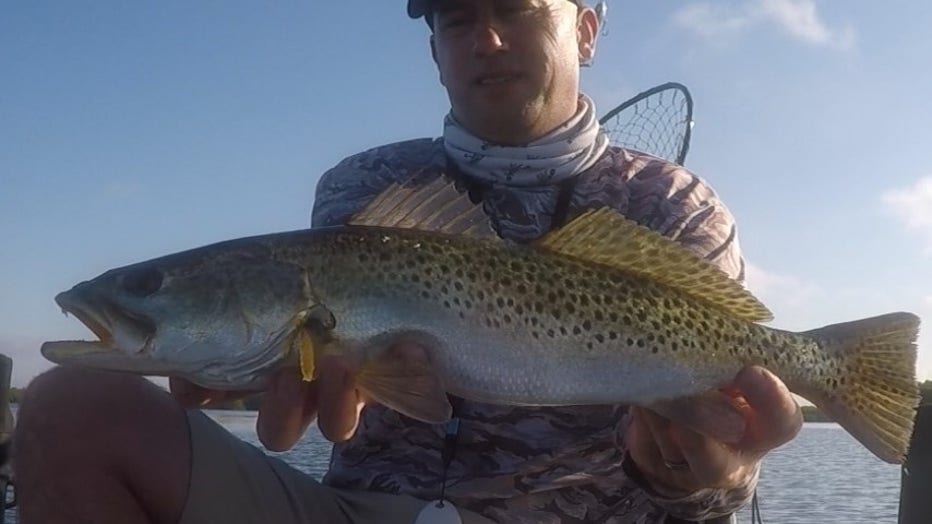 Mangrove snapper in the passes and around the Tampa Bay bridges and rock piles, plus around the piers too. The mangroves are still very active inshore around the structure eating shrimp or greenbacks. It helps to hit them at the start or end of the tides so you can use lighter tackle and give a more natural presentation devoid of using any weights, or super light weights if you need any. They are very quick biting fun to catch fish on lighter tackle.

Great time of year for the triple tail in Tampa Bay and along the beaches. They hang just on or below the markers and buoys, but right now it seems they are hanging a little deeper. Sometimes, you won’t be able to spot them right away so approach slowly and silently. and try to present a bait to their floating hiding spot before you get too close to spook them. My favorite method for these guys is a free-lined live shrimp. However, a little popping cork just above your live shrimp will give you more casting distance and accuracy. If you need any help making sure your live bait is in the strike zone.

Also, in addition to all these species we have seen a few cobia caught inside Tampa Bay and around the local area. Most of those cobia have been caught on pinfish, crabs, and eel baits. I like using a jig head and one of those senko bass worms in the dark green or purple color for the cobia sight fishing.

Near shore
Lots of hogfish are being caught lately near shore from between 30 and 70 feet of water the hogfish bite seems to really be taking off finally. They love the live shrimp, but fiddler crabs or rock shrimp work for them too. Around 20 and 30 pound floro and 3-4ot hooks are best.

A very natural presentation helps with minimal weight on your line. You can use one of three methods for them to be very successful. My favorite, but often the most difficult, is the light knocker rig with 1oz of lead or less. Also, a nekid ball jig works well in the 3/4oz, 1oz or 2oz sizes. Finally, the most common method a lot of people use is the jig head method so just a bare jig head with the live shrimp or fiddle crab on the hook for bait.

Just keep in mind, hogfish are often the last fish to bite, so you have to fish through all the other more aggressive grey snapper (white grunts), seabass, juvenile grouper, vermillion, lanes, and mangrove snapper. Then, finally, some porgies will start biting and, shortly after, the first hogfish will come up. Once you get the first one, you should get a few more every 5 to 10 minutes. after you stop catching them with more than 15 to 20 minutes since your last hogfish, it’s time to pull up anchor and move onto the next spot. The smaller ledges and rock piles seem to hold the most cooperative hogfish, while the larger ledges and spots often have more fish species and numbers eating your baits before the hogfish can. Plus, those larger areas typically have more fishing pressure from other anglers making it tough to get quality hogfish off those areas.

The mackerel are super thick near shore right now as well. We are seeing them from the beaches out to around fifteen miles from shore. They love eating the trolling spoons between 12 to 18 feet behind number one or number two planners or the smaller plugs like the Rapala Xrap 20’s or trolling feathers.

You can also catch plenty of them near shore by getting up on a near shore wreck, reef or rock pile that’s holding bait and chum them over to your boat floating out live green backs using the methods of live bait we talked about in the inshore section.

Kingfish are finally showing up and we’re catching them -- trolling the Rapala Xrap Magnum 30’s or 40’s or the bigger trolling skirts. You can sometimes catch them trolling the spoons behind planners but often they like the big plugs or skirts more. We often catch them flat line fishing while bottom fishing near shore, as well. Flat line fishing while drifting is easy as you can use a dead threadfin or sardine on a stinger rig with 30-40lb wire.

When anchor fishing, if the current isn’t strong, you may need to add a balloon around 4-10ft above your stinger rig to keep that threadfin, sardine or live blue runner up on the top of the water column dancing in the waves while you are bottom fishing. Often this will produce some kingfish action to compliment your bottom fishing fun.

On the bottom around 70 to 100 feet of water is where we have been finding lane snapper, vermillion snapper, mangrove snapper, some red grouper and a few gag grouper. The gags are starting to move into the near shore waters eating pigfish, pinfish, squirrel fish or dead threadfins. If you are lucky to sabiki up some live sardines they are killer near shore grouper-candy too. Red grouper like live pinfish, pig fish, squirrel fish, baby octopus or squid wing strips cut to mimic octopus tentacles. For both of these, grouper species around 60-pound test and a 6-7ot circle hook is the best near shore grouper tackle selection.

For the snapper species, I like using around 30-40lb fluorocarbon leaders with 4ot hooks and a cut threadfin plug on a double snell rig. However, live shrimp on a knocker rig or jig head or nekidball jig will work well with lighter tackle spinning rod set ups, and it makes near shore snapper fishing a ton of fun. 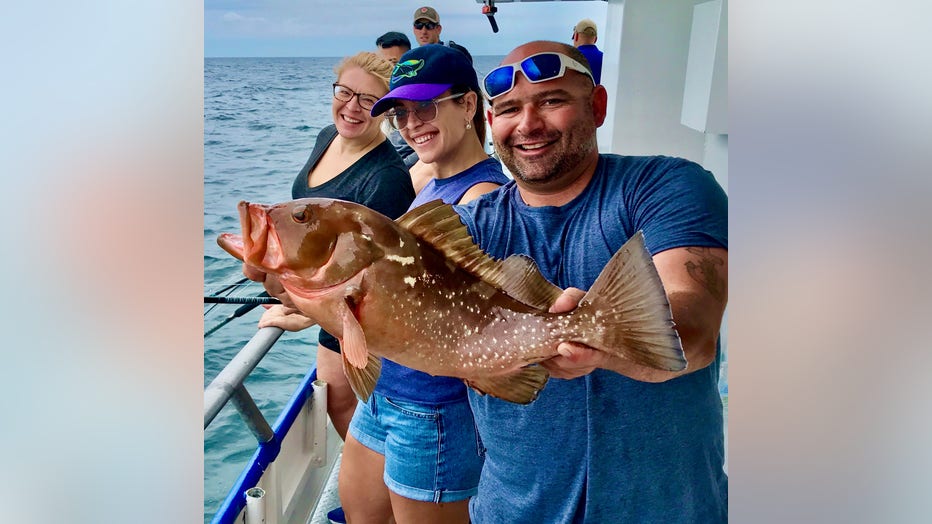 Offshore
This past weekend, we could not make it offshore due to the tropical storm that messed up our chances to go deep. However, we just had a mid-week 39-hour return Thursday morning that had great mangrove snapper fishing action, a decent grouper bite and a few nice amberjack on board.
We are seeing some of the kingfish out deep and the occasional blackfin tuna too. Out deep around 120 to 160 feet seems to be a great area to target right now when offshore fishing.

When targeting snapper species out here, I like to use 40-50lb floro leader and a 5-6ot double snell hook set up with a threadfin or sardine plug. High-speed conventional reels or larger 5000-6000 series spinning reels will work. I like sticking to conventional reels especially a two-speed conventional, that way, if I accidently hook into a grouper or bigger snapper while bottom fishing, I have a shot to land that quality fish.

With spinning rods, you got little to no shot unless you get very lucky, and with a high speed conventional without the second lower gear ratio option it makes it tricky to get that bigger snapper or grouper up off the bottom without getting rocked up or broke off.

For grouper species out deep, strictly, I stick to the conventional reels in the medium to low gear ration with 40 or more pounds of drag like a 6ot reel for dead bait and smaller live baits with 80lb test and 7-8ot hooks. However, if I am dropping down a big bait, I use more like a 9ot monster reel with 50-60 or more pounds of drag and an 80-125lb leader and 8-12ot hook.

Offshore live baits that work well are pinfish, pig fish, squirrel fish. For bit baits, I may use a knobbed eye porgy, lizard fish or spadefish too.