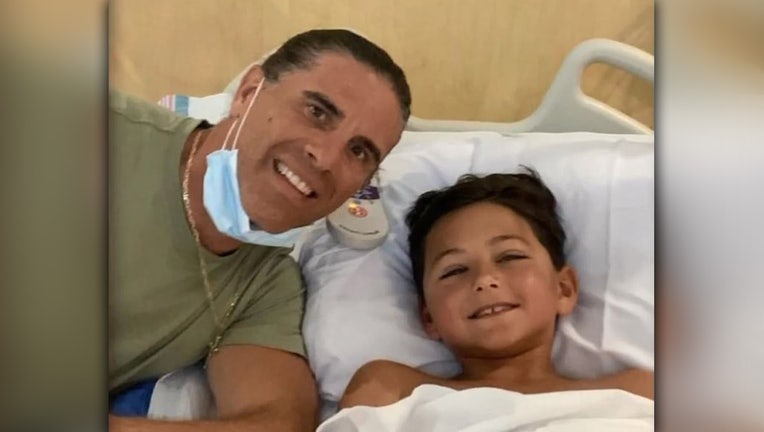 10-year-old Jameson Reeder Jr. recovers in the hospital after having part of his leg amputated following a shark attack in the Florida Keys. (Photo: James Miller via WSVN)

MIAMI - A 10-year-old boy had to have part of his leg amputated after he was attacked by a shark while snorkeling on vacation with his family in the Florida Keys, according to his family.

Jameson Reeder Jr. was snorkeling with his parents and three siblings along a shallow reef when they believe an 8-foot bull shark landed a "crushing blow" below his knee, his uncle, Joshua Reeder, wrote in a Facebook post.

The boy’s family, still on a boat, heard him yell for help as he held onto a noodle float, according to Reeder. He said that Jameson’s father jumped in to rescue his son.

They applied a tourniquet to Jameson’s leg above the bite and waved down a nearby boat that had a nurse on board, Reeder said.

Paramedics were waiting on the shore, where a helicopter airlifted the boy to Nicklaus Children's Hospital in Miami.

"They had to use five quarts of blood to save him," family friend James Miller told WSVN. "It’s still a miracle he’s still alive."

However, Reeder said that doctors could not save Jameson’s leg.

"They had to remove/amputate from just below the knee to save his life as it was not operable from the damage the shark had caused," Reeder wrote. "They said the shark made the decision for him and wasn’t anything they could do to save it. But his life was spared. Thank you Yeshua/Jesus!!!"

Friends of the family said the young boy's faith helped him survive.

"As they were taking him in, he’s saying, ‘Jesus is going to save me,'" Miller said.

Reeder said Jameson, who is turning 11 in a couple of weeks, was out of surgery and resting.

It's the latest in a string of shark bites in Florida. In late July, there were three shark attacks reported in Florida in less than one week. But experts say the chances of being bitten by a shark are still extremely rare: about 1 in 4 million.

PREVIOUS: Three shark attacks reported in Florida in less than a week

"They've been there all along. They're always migrating at this point in time. There's young sharks being born, but in the grand scheme of things, they've been there for years and years," said Chris Schreiber, Director of Animal Care for the Florida Aquarium. "What's changed is our ability to get really good footage."

As Schreiber explained, when sharks do attack humans, they're likely just confusing a person for food.

"This is one of those places where the increased number of people in the water leads to an increased opportunity for mistaken identity to occur," Schreiber said.