Aleman Construction&nbsp;went to the Hillsborough County Sheriff's&nbsp;Office after they noticed at least 20 checks were missing from their mailbox.

PLANT CITY, Fla. - A Plant City business was the target of a mail theft earlier this week, and now they have a warning for others as authorities hunt down the culprit responsible.

Aleman Construction went to the Hillsborough County Sheriff's Office after they noticed at least 20 checks were missing from their mailbox.

"All the mail was gone and the front opening of the mailbox was open with the flag still up," said Nicole Cruz, an employee with Aleman Construction.

After checking surveillance footage, they quickly uncovered what had happened. A white truck driven by a man in a red shirt can be seen darting into lanes of oncoming traffic, snatching the business's mail and driving off.

Inside those envelopes was nearly $100,000 in outgoing checks.

"We had about 20 checks in the mail going out to pay bills, a significant amount of money, so had we not realized, I mean 20 checks, that's 20 different companies that we would have had to get everything straightened out with," said Cruz.

This isn't the first time this has happened for Aleman Construction. The company was also a victim of mail theft in 2018. They now wonder why their business continues to be targeted.

"The only thing we could think is they know the area, they know that we're a business so maybe they thought they'd have a little bit of a better chance of getting something they could use out of our mail," said Cruz.

The culprit responsible for last year's theft was never caught. And while this incident appears to be unrelated, the business is fed up. 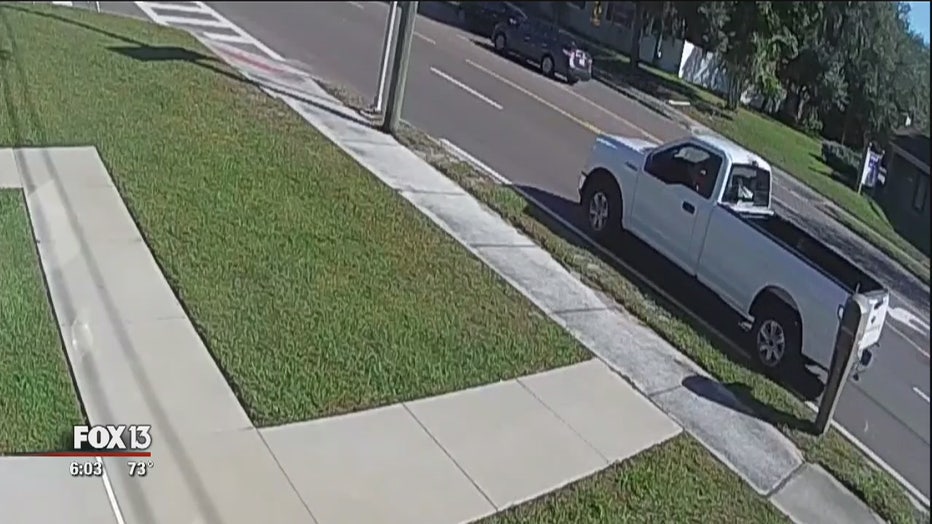 "It's a little scary. They're stealing mail, you don't know what they have with them," Cruz said.

Employees are not taking any chances. They have decided to skip the mailbox altogether and hand-deliver their letters to their mail carrier.

After filing a report with HCSO, employees are afraid another business along North Parsons Avenue could be next. They now have advice for others.

HCSO and USPS are working together to investigate the incident.