She wore a pair of sparkling silver high heels, with her hair straightened under her royal blue cap, video of the ceremony livestreamed on Facebook shows. As a photographer captured a shot of her gripping her diploma, she smiled: The next stage of her life was about to begin.

But it was cut short Tuesday night, when the 18-year-old was shot three times at a Texaco gas station in Jackson. She died at the scene just before 11 p.m., Jackson Police Department spokesman Sam Brown said.

The shooter fled before police arrived, Brown said. Investigators were interviewing witnesses Wednesday. They have not released information on whether Hobbs knew her killer or said what circumstances led to her death.

The death of Hobbs, who was the daughter of a faculty member in the district, has cast a shadow over the end of the school year ceremonies planned for the week. The city was celebrating graduations at its seven high schools after a year marked by challenges brought by the coronavirus pandemic. Multiple commencements were planned so the district could limit crowds and follow COVID-19 safety precautions.

"To get the news this morning of the passing of one of our dear graduates, it’s tough," he said. "It’s really tough. And it brings into view just how important this work is that we do." 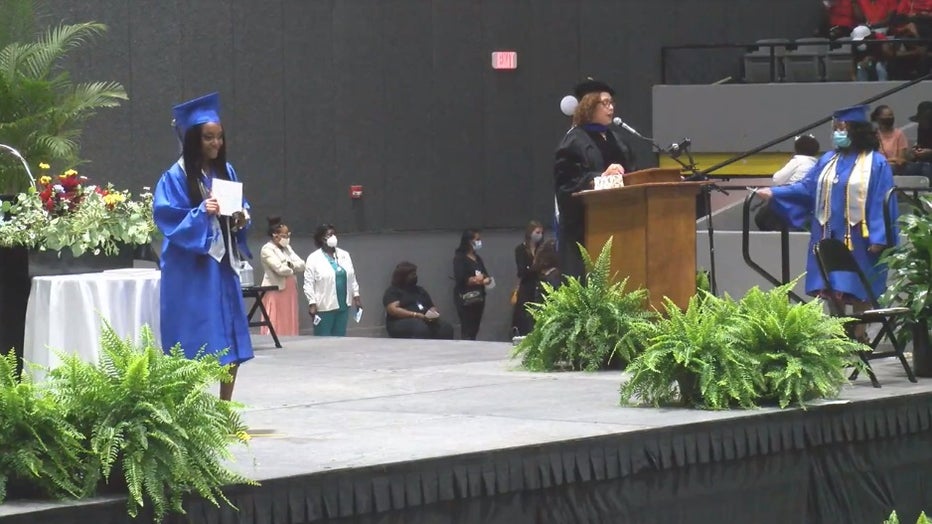 Whenever Greene speaks to graduates, he urges them to be mindful of their time on this Earth and not to put off pursuing their dreams, he said.

Speaking at Wednesday’s graduation ceremony, after the news of Hobbs’ death, "it really did hit a little differently," he said.

"It was a little more timely and meaningful as I challenged them to look to the left and look to the right to realize that they may not see their classmates again," he said.

Usually, when he tells students that, it’s because he knows they’ll all follow different paths after graduation.

"The reality is, we just don’t know when our last day will be," he continued. "And so it’s just important for us to be more smart about how we set our lives up and the way that we sow positivity and peace in the world and the community around us."

Mississippi’s capital saw a record number of homicides in 2020, with close to 130 killings in the city of about 161,000. Most were gun-related, according to law enforcement.

In 2021, the city is on track to surpass that milestone. As of the end of April, 50 people had been killed in Jackson.

Greene said he’s often asked what the school district can do to reduce violent crime in the city. He said education is one of the most powerful tools the community has.