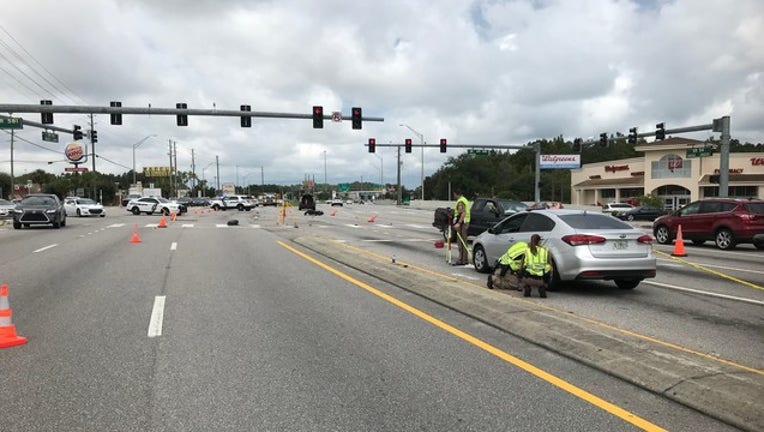 WESLEY CHAPEL, Fla. (FOX 13) - Pasco County deputies and the Florida Highway Patrol say two people are in custody after the pair carjacked a driver after a deadly hit-and-run crash.

The crash occurred around 7:30 a.m. Saturday at the intersection of State Road 54 and Bruce B Downs Boulevard.

According to investigators, the male suspect was driving a Dodge Dakota eastbound on State Road 54 when he ran a red light at Bruce B Downs Boulevard. The vehicle collided with a motorcyclist, identified as 26-year-old Angel Rodriguez Fiallos.

Troopers said Fiallos was rushed to a nearby hospital, where he died.

After the crash, the suspect and his passenger, a woman, fled on foot to the WaWa store. According to deputies, the couple then carjacked another driver and left in the victim's vehicle, a 2002 two-door Saturn.

"Coming through the two front doors, I seen two people get in my car and pretty much try and take off," said Dillon Coffeen, the carjacking victim.

But Coffeen didn't let them get away without a fight.

"I spider man jumped over the hood, opened the door, right-hooked him really quick," he said. "He pretty much dragged me, and then I got up, threw my hash browns and they just left."

However, despite losing his car, he is more upset that the pair left the motorcyclist for dead.

"I think it's a low blow. Especially on a bike, it makes me mad a little bit. I don't know how you can hit someone on a bike and just be like 'oh, let's dip out,'" Coffeen said.

Hours later, deputies located the carjacked vehicle and began a pursuit, which ended near the 6600 block of Knights Griffin Road.

Anyone with information about the incidents is asked to contact the Pasco County Sheriff's Office.